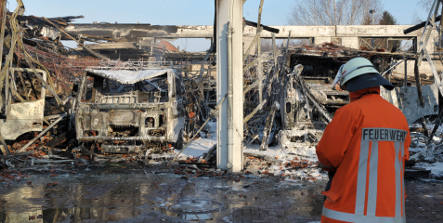 This time the blaze destroyed the entire fire station as well as the engines.

No-one was hurt in the blaze, but it is estimated the damage could cost at least three million euros.

Nearby houses had to be evacuated due to the thick smoke coming from the fire station, while a total of 250 fire fighters fought to bring it under control.

A police spokeswoman said that the fire department in Syke had lost all its engines in a fire in 1994 and that the ones which were destroyed at the weekend had been bought new then.

An investigation is underway to determine what caused the fire.