Hans Åkerlundh, the principal at the Haga School in Dals-Eds municipality, was in the process of disciplining the students when they suddenly began hitting and kicking him, reports Sveriges Radio.

According to Åkerlundh, the students likely felt cornered, which may explain their reaction.

He added that the school planned on developing new procedures so that similar events don’t occur in the future.

“I believe that we can work together. Not only the police and the school, but also with these students and their parents, to look at how their school attendance should be,” said Åkerlundh.

As the students are minors, police don’t plan to pursue a preliminary investigation but will instead send the matter along to social services.

However, Per-Erik Vister of the nearby Åmal police force thinks police involvement could help send youth a message that such behaviour is not acceptable.

“I’d actually really appreciate it if the police got involved in the case because this is so serious,” he told Sveriges Radio. 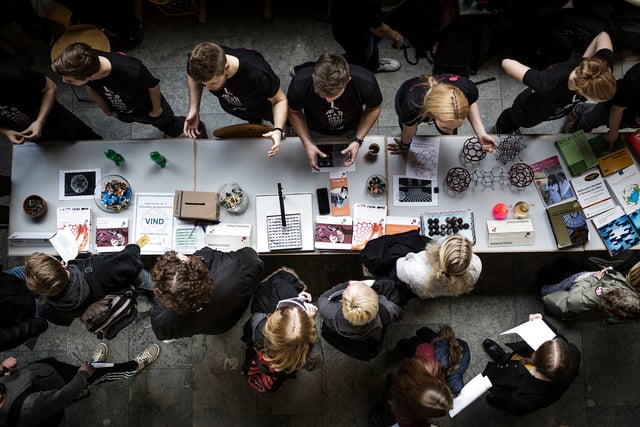 At the end of June, the plan aims to reduce the number of English-language higher education programmes while also expanding educational opportunities outside of Denmark’s major cities.

The exact number of courses to be cut – and where they will be cut – depends on the future employment of graduates.

The reduction of English-language programmes at institutions of higher education is rooted in an effort to reduce rising costs of state educational grants (SU) in Denmark. Despite attempts to reduce SU expenses, the cost is expected to rise to 570 million kroner by 2025, far above the cap of 449 million kroner set in 2013.

There are a number of cases in which non-Danish citizens are entitled to SU, from moving to Denmark with one’s parents, marrying a Danish citizen, residing in Denmark for more than 5 years, status as a worker in Denmark, and more.

The reduction is targeted at English-language programmes where few English-speaking students find employment in Denmark after graduation, according to Denmark’s Ministry of Education and Research.

Among the targeted programmes are business academies and professional bachelor programmes, where 72 percent of students are English-speaking and only 21 percent find work in Denmark after completing their education.

However, programmes where higher proportions of English students enter the Danish workforce, and those that have a unique significance on the regional labour market, will be exempt from the reduction. This amounts to 650 education institutions around the country.

The agreement also establishes a financial incentive for institutions that graduate English-speaking students who remain to work in Denmark.

According to a June 10 analysis from consulting firm Deloitte, EU students who receive higher education in Denmark contribute an average of nearly 650,000 kroner to Denmark’s public coffers over a lifetime.

The analysis expressed concern that reducing opportunities for English-language higher education could “have a number of unintended negative consequences,” including deterring students who might stay in Denmark to work from moving in the first place. There’s also the risk that it will become more difficult to recruit foreign researchers to Danish universities, which could impact education quality, the analysis claims.

Minister of Education and Research Ane Halsboe-Jørgensen said the goal was to offer students educational opportunities regardless of where they live within Denmark and strengthen the economy outside of major cities.

However, the Danish Chamber of Commerce, Dansk Erhverv, expressed concern that the decentralisation plan doesn’t factor in labour demands within Denmark’s major cities.

Mads Eriksen, head of education and research policy at Dansk Erhverv, said it was “unwise” for programmes to reduce acceptance rates to in-demand fields in that particular city.

“They are trying to solve a problem with labour in the countryside, but at the same time they are creating labour problems in the cities,” Eriksen said. “The English-language programme cuts are far more aligned with the demands of the labour market.”

Denmark has utilised unemployment-based admission for higher education since 2015. Programmes whose graduates experience unemployment consistently 2 percent higher than average are subject to a 30 percent admission cut.

“For example, we have five philosophy education programmes in Denmark, each of which have high unemployment rates among graduates,” Eriksen said, referencing a recent Dansk Erhverv analysis.

He would prefer to see resources concentrated into making a couple of those programmes the best they can be and closing the rest, versus reducing admissions in all five programmes. “We have to be ready to close programmes that continue to have high unemployment, not just reduce them.”

Opposite impacts on provincial institutions

Gitte Sommer Harrits, vice chancellor at VIA University College, shared concern that although the decentralised education aspect of the plan aims to increase the number of students at provincial universities, the reduction of English-language programmes is likely to have the opposite effect.

The University of Southern Denmark in Sønderborg has the highest proportion of international students; 40 percent of its 628 students are not affiliated with Denmark or other Nordic countries.

Already in 2018, the University of Southern Denmark closed one English-language programme and converted two others from English to Danish after the Danish government ordered universities to reduce the number of international students.

Harrits said she found the possible closure of English-language programmes drawing international students to provincial areas to be puzzling when paired with the intention to decentralise education.