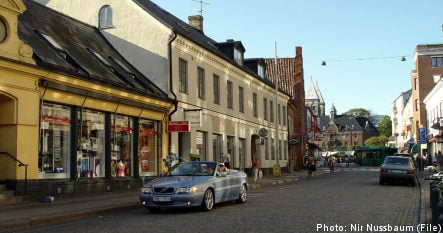 The proposal is one of three alternatives to come out of an inquiry to consider alternatives for the city whose residents have become tired of congestion in the city centre.

The inquiry was set up soon after the election in 2006 and since its inception protests have grown and a number of petitions have been submitted to local officials.

City councillor Tomas Avenborg received a 4,000 signature petition in November 2008 organized by residents of Klostergatan, one of the main shopping streets crossing the city. Avenborg promised at the time that Lund residents would soon be presented with three proposals to consider and on Saturday the alternatives emerged.

The most radical of the three proposals presented by the inquiry is to ban buses and cars completely from the city centre.

A second proposal under consideration is to close off the main square, Botulfplatsen, and Klostergatan from traffic.

All three proposals accept that little can be done to keep delivery vehicles and some other necessary vehicles from the city centre but the first two at least would dramatically change the look of the historic centre of the university city.

Local officials have spoken about the potential to turn Botulfplatsen into a city square along the lines of Lilla torg in Malmö (Lilla torg is a small square completely free of traffic that offers year-round al fresco dining, shopping and activities).

The issue has engaged Lund residents, officials and bus drivers alike who argue that the throng of pedestrians, cyclists, cars and buses on central Lund’s narrow streets make accidents inevitable.

Lund city centre is defined as the old city ramparts which are marked out by Allhelgonakyrkan (All Saints Church) in the north, the Mejeriet house of culture in the south, Spyken upper-secondary school in the east and the western toll gate in the west.

The proposals will now be the subject of discussion and debate by officials and residents alike during the spring. A meeting of the city council will be convened on September 24th and a decision will be taken as to how to progress.

“My guess is that it will end with a compromise between the different alternatives,” Avenborg said to the newspaper.