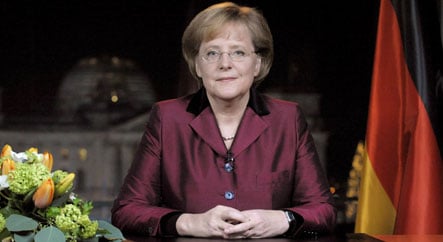 In an address to the nation to be televised on New Year’s Eve, Merkel told her countrymen despite the global financial crisis they could be confident Germany’s economy was strong enough to weather the difficult times ahead.

“Have trust in what we are capable of, that’s what’s important right now,” she said.

Merkel even said the worst economic downturn since the Great Depression could even present an opportunity to strengthen Europe’s largest economy, which is also the world’s biggest exporter.

“We don’t simply want to withstand the effects of the worldwide financial crisis. We want to come out of it stronger than we went into it,” she said.

But she said that would only be possible if the nation united for a common cause.

“It’s possible that we achieve this together,” she said, pointing to the German tradition of seeking consensus on important societal issues. “This shared conviction can help us move forward everywhere,” Merkel said.

The chancellor said her government’s priority for 2009 would be to keep Germans working despite a deteriorating economy.

“Jobs for the people – that is the standard for our actions,” she said.