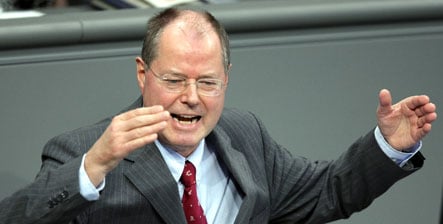 In a recent interview with the AFP news agency and fresh from his broadside against the British government’s response to the economic crisis, Steinbrück said there was a danger of repeating the dangers of the past.

“On the one hand we need to boost the economy, on the other hand we must make sure that a policy of cheap money does not lead to a new growth bubble founded on credit, as happened after September 11, 2001,” Steinbrück said. “It is therefore important that the focus, at least in Germany, be on sustainable investments in infrastructure and less on consumer spending financed by debt,” he said.

“This is also an argument against hasty tax cuts,” he said. After the 9/11 attacks on the United States and the bursting of the tech bubble, central banks slashed interest rates in an effort to boost growth, allowing consumers to take on huge debts.

This is blamed for contributing to 2008’s credit crisis and the ensuing sharp slowdown worldwide. Central banks have now again reduced borrowing costs, this time even more drastically.

In Germany, where interest rates are set by the European Central Bank as a member of the group of countries using the euro, Chancellor Angela Merkel’s government unveiled a package of measures in November to boost growth. But with Europe’s biggest economy already in recession and facing its worst post-war slowdown, Berlin has been under pressure from all sides to give the economy a much more powerful shot in the arm.

Germany’s ruling coalition – Merkel’s CDU/CSU conservatives and the centre-left Social Democrats, of which Steinbrück is a leading member – are to chew over what else they could do at a meeting on January 5. But in the interview with AFP, Steinmeier again made clear that any new rescue package would not see Germany abandon its cherished budgetary discipline by slashing taxes and ramping up the national debt.

“What we do must be intelligent, be fair to future generations and reap future benefits,” he said. “Making temporary cuts in value added tax (VAT), for example, fulfil none of these criteria.” Merkel and Steinbrück say the first package is worth over €30 billion ($40 billion) but critics accuse them of exaggerating their efforts and say it represents only €12 billion worth of new spending.

Steinbrück said earlier this week that the second package would include steps to help the auto industry and remove hurdles to ensure that infrastructure projects were not held up by red tape. He told the daily Passauer Neue Presse that cutting people’s health insurance contributions would be much more effective in putting cash in consumers’ pockets than reducing taxes.

Germany’s government has angrily rejected calls from economists, politicians from all parties and even from other countries that it is not doing enough to boost its economy, the world’s third biggest. Steinbrück went as far as to dub the British government’s use of heavy borrowing to boost its economy as “breathtaking” and “crass Keynesianism,” referring to 20th century British economist John Maynard Keynes who advocated governments should spend their way out of recession.

He also told AFP that he was confident that once he takes office as US president in January, Barack Obama would press ahead with reforms of international financial system as agreed by Group of Seven major economies.

“I am certain that Barack Obama will seize the initiatives that we have taken at G7 level and press ahead with them with his government,” he said. “Seldom was the chance so good to transform the lessons from such a difficult crisis into concrete political action,” he said.