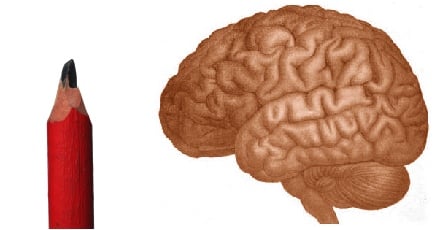 Jimmy Pettersson was admitted to Blekinge Hospital in January with part of a pencil sticking out from just above his right eye.

The pencil had penetrated Pettersson’s eyelid after he had tripped and fallen on it earlier in the day while holding the pencil in his hand.

Doctors at the hospital cleaned the wound, and an eye specialist was called in to remove additional fragments of the pencil from Pettersson’s eye socket and sealed the wound with stitches.

No x-rays were taken, and doctors concluded that Pettersson’s continuing nausea was due to a concussion. He was kept overnight for observation and released the following day.

But within a day of his release, Pettersson was back in the emergency room with continuing symptoms, including a high fever and spells of nausea and dizziness.

A subsequent CAT scan revealed that Pettersson had a five centimetre long piece from the pencil had passed through the back of his eye socket and remained stuck in his brain.

Petterson was then taken to the neurosurgical unit of Lund University Hospital, where surgeons removed the remaining piece of the pencil and diagnosed the boy with infection and inflammation of the brain.

The two doctors who originally treated the boy have now been reprimanded by Sweden’s medical responsibility board (Hälso- och sjukvårdens ansvarsnämnd – HSAN) for not considering the possibility that part of the pencil might have remained in the boy’s head, beneath the visible wound.

In its ruling HSAN says the doctors ought to have taken x-rays straight away, but the board opted not to formally discipline the doctors because the injury was so unique.