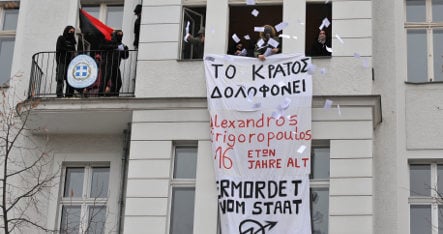 Some 30 protestors invaded the building at Wittenbergplatz, Greek consulate spokesperson Pantelis Pantelouris told DPA. They removed the Greek flag and replaced it with a banner that reads “state murderers,” but have remained peaceful, police said.

One of the demonstrators told the news agency that the group’s action was against the Greek authorities, whom they see as responsible for the student’s death on Saturday night.

Berlin police said they had some 130 officers on the scene and are talking with the protestors to resolve the situation, the website of news magazine Der Spiegel reported.

Left-wing protests and rioting against the conservative government spread across Greece over the weekend, following the death of the boy on Saturday. Authorities await the results of an autopsy to determine whether he died from an intentional gunshot wound, or whether the death was the result of a ricocheted warning shot as police claimed.