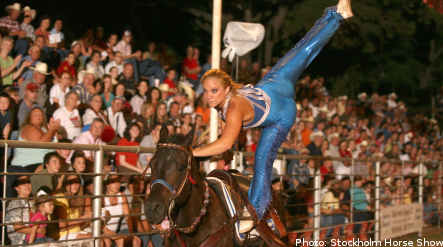 This year’s opening night festivities offered no such titillating distractions for the male minority in attendance at Stockholm’s Globe arena (Globen).

The world’s largest indoor equestrian event (in spectator terms) got off to a rousing start with partner country – the USA – offering up the highlight of the evening in the form of the All American Cowgirl Chicks.

The Chicks originate from Weatherford, Texas and served to underline that equestrianism is a woman’s domain and they made no excuses for it.

When the last of the star-spangled troupe left the arena they were soon followed by this year’s Fancy Dress competition.

A full Globen had in 2007 seen Danish rider Tina Lund dressed as Baywatch babe Pamela Andersson. The audience in 2006 witnessed the might of the British team up close and personal as they took home the fancy dress competition clad only in their boxer shorts.

The Swedish Equestrian Federation (Svenska Ridsportförbundet) has, according to Aftonbladet, been trying to clean up the event in recent years.

“It is fun to see one’s favourite riders in unexpected situations but fake penises are not that much fun,” said Margareta Borg at the Federation to Aftonbladet.

So this year there was only a hint of the offending bodily appendages with Robert Whittaker, who went on to win with Maria von Essen, clad as a half-naked Santa with what appeared to be a form of Gaelic sporran containing his ‘package’.

The fun and games at the Stockholm International Horse Show continue over the weekend with the All American Cowgirl Chicks returning on Saturday and Sunday evenings along with international jumping, dressage world cup, Christmas shows and Champions League horseball.