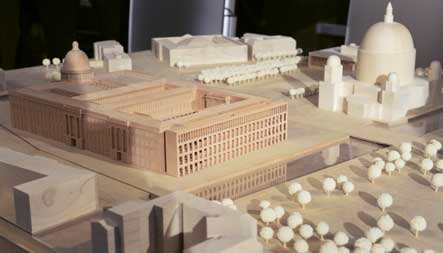 Francesco Stella won the unanimous support from a jury deciding between 30 different proposals that had to copy three sides of the original rectangular former royal palace but were free to come with their own designs for the final side.

The original 18th century palace, at one end of the Unter den Linden boulevard, Berlin’s answer to Paris’s Champs Elysees, was badly damaged in World War II and demolished as a symbol of hated Prussian imperialism in 1950.

In its place the East German authorities went all out, erecting an enormous parliament building made of bronze mirrored glass, steel and concrete called the Palast der Republik that also housed an underground bowling alley and auditoriums.

After East and West Germany reunifiied in 1990, the building was found to contain large amounts of asbestos. After much debate and vociferous opposition from many nostalgic Berliners demolition began in 2006, a process completed only this month.

Stella’s design, which will cost €552 million ($700 million) managed “to restore history and (to provide) a modern answer,” said Transport, Building and Urban Development Minister Wolfgang Tiefensee. Construction is expected to get underway in 2010 and be completed by 2013.

But while the Berlin official in charge of urban development, Regula Lüscher, said she was satisfied with the overall design by Stella, she expressed disappointment in many of the proposals.

“It was difficult to rebuild the palace in such a way that made it look authentic, so it didn’t just resemble a facade that had no relationship with the surroundings,” she told Berlin’s Der Tagesspiegel newspaper.

It will be used to house cultural artefacts and will also be home to cinemas, restaurants, cafes and shops. The German parliament is to take up the plans next year.

Planning is also underway to rebuild long-destroyed palaces in Hanover and Potsdam; a former royal hunting lodge in the west could also rise again soon; a palace in Dresden is nearing completion and last year, the exterior of a Braunschweig palace was completed.

After World War II, many German cities – including Berlin – rebuilt damaged and destroyed palaces and historic buildings. But urban planners in both East and West Germany also demolished many ruined buildings on ideological and aesthetic grounds.