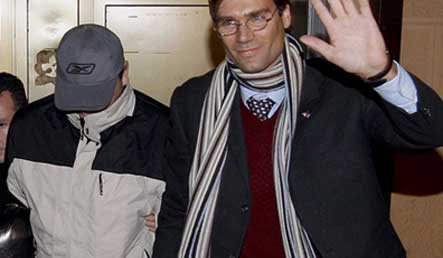 A hooded suspect escorted by an official. Photo DPA

“Our appeal was accepted and their detention was revoked,” lawyer Fehmije Gashi-Bytyci told reporters in Pristina Friday.

Adem Ademi, another defence lawyer, said that according to the court’s decision, the three Germans, who allegedly belong to the German intelligence services the BND, could return home. No further details have emerged on the court’s action.

The German nationals were arrested on November 19 on suspicion of having bombed the Pristina headquarters of the International Civilian Office (ICO), run by EU special envoy Pieter Feith.

On Thursday, the UN court deferred to international authorities its decision on an appeal by lawyers acting for the three against their month-long suspension based on a lack of evidence.

The international judges, present in Kosovo as part of a post-war mission of the United Nations, decided to accept the defence’s appeal.

Gashi-Bytyci said the three, whose identity was not revealed, “are now free and will defend themselves while on bail.”

Ademi said the defence had also demanded the three to be cleared from all charges, but this request “was not considered at all.”

Earlier on Friday, the Berlin government called on Kosovo authorities to release the three, but refused to reveal their identity or confirm that they worked for the BND.

“The German government … calls for the immediate release of the three German citizens,” government spokesman Thomas Steg said, reiterating the trio were “not implicated in the terrorist attack.”

Kosovo and German media reports said the trio were investigating the blast for the BND. Since they were not registered with the Kosovan government, however, they had no diplomatic immunity.

The explosion came amid opposition by Kosovo Albanians to the planned deployment of a European Union civilian mission focused on police, judiciary and customs by early December under an agreement reached between the United Nations and Serbia.

No one was injured in the blast, which shattered the windows of the ICO office.

In February, ethnic Albanian-majority Kosovo unilaterally declared independence from Serbia, which has rejected the move as a breach of international law.

More than 50 states, including the United States and most EU members, have recognized Kosovo’s independence.