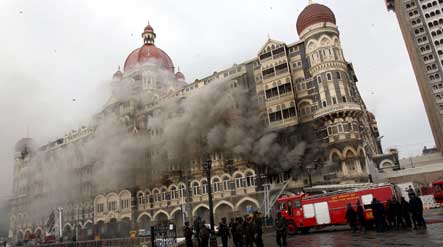 At least one German national was confirmed dead, Germany’s foreign ministry said, while officials were working hard to confirm reports by Indian officials that three other Germans had also been killed.

Representatives from the German Federal Criminal Police office (BKA) were on their way to Mumbai to assist in the investigation after the deadly siege apparently ended early on Saturday with Indian forces taking control of the luxury Taj hotel.

A foreign ministry spokeswoman said they were in close contact with Indian authorities to follow up and would release information as soon as it became available.

The one German national confirmed dead was the co-owner of the Munich-based production company C.A.M.P. TV, 51-year-old Ralph Burkei, the company said.

Burkei died after falling from an upper floor of the luxury hotel. He had been trying to escape from the building after it was raided by armed terrorists. He died on the way to the hospital. His partner, Ute Bernhardt, was critically injured and has been flown to Germany for treatment, where she is reportedly in intensive care.

Other Germans caught up in the massacre have also been giving their accounts of the attack, which shut down parts of south Mumbai for three days, and laid waste to two luxury hotels, a café, a Jewish centre and parts of the main railway staiton.

Erika Mann, a German member of the European Parliament, called the assault “the worst situation of her life.”

She had been sitting in the hotel restaurant at the Taj hotel when the attack began. She told Bild newspaper: “We immediately suspected that it was an attack. About 100 of us stayed on the first floor for about an hour. Then the staff told us we had to get out.”

Mann, a member of the Social Democratic Party, escaped via the hotel basement, moving through a maze of narrow corridors before getting outside. There she was picked up by a car driven by Indian journalists.

“I didn’t know if I would escape with my life,” she told the paper at London’s Heathrow airport.