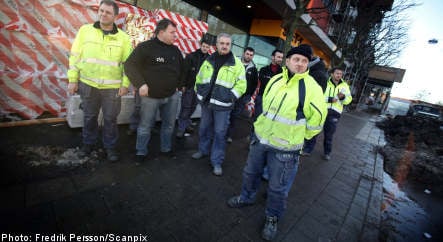 They welded several doors shut and dragged containers in front of the building, which they had been in the process of renovating.

The head of the small construction company which is hunkered down in the building told the TT news agency that a large customer has refused to pay.

“For us this is a lot of money, but for the project, which is worth a half a billion kronor ($63 million), it’s not so much,” he said.

If the debts aren’t paid soon, the company will go bankrupt, according to the man.

He has turned to debt collectors to settle the issue, but time is running out.

The company boss is aware of the risks that come with the protest action.

“I’ve been thinking about this over and over all day long. No matter which way I turn, I’m going to run into problems with some authority in Sweden. If I don’t get the money, I’ll go bankrupt, and people won’t get paid.,” he said.

“I decided last night that I’m just going to go all the way and suffer the consequences.”

He describes the mood in the building as calm.

“The guys are a little tired, we’ve been here all night. But I think that they are happy anyway,” he said.

Police spokesperson Carina Nilsson said the police have been in contact with the construction workers.

“We spoke with them overnight. They say there are seven of them inside the building,” she said.

Police have filed a report for unlawful dispossession, but are no longer on the premises of the occupied building.

“We’re just standing by. For the time being we aren’t going to do anything more,” said Nilsson.