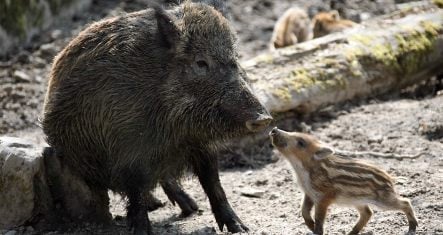 The injured animal then ran through the room while people scrambled up onto tables and chairs to get out of harm’s way, authorities said.

The boar eventually found his way out through the damaged door and the mothers and children escaped with only their composure in tatters.

But the animal’s escape into freedom didn’t last long. It was run over by a car a short distance away from the centre.

Interactions between wild boars and humans are likely to become more frequent due to a wild pig population boom.

Milder winters mean that boar herds can breed year round, and expanding commercial crops provide more food than ever before. Corn acreage has tripled over the last 30 years and seems to hit the spot for the furry foresters.

More boars are also being seen in urban areas, where they tear up gardens and cemeteries, and sometimes cause traffic accidents.