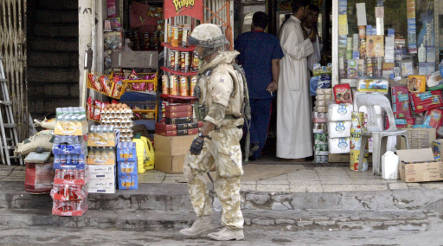 File photo of a US soldier in Iraq. Photo: DPA

He said he had submitted his asylum request on Wednesday, although the Federal Agency for Migration and Refugees told the DPA news agency it did not have a record of such a document.

Shepherd, 31, has previously served in Iraq where he repaired and maintained Apache helicopters. “I believe that the helicopters are responsible for a substantial number of civilian deaths,” he told reporters in Frankfurt. “I am ashamed that I was a part of these horrible acts.”

Shepherd has appealed to both the Geneva Refugee Convention and EU guidelines that provide protection from persecution for deserters if the military services in question are seen as having violated international law.

Shepherd, who is from Cleveland, Ohio, deserted in April 2007 when he learned he would be sent back to Iraq. He is the second US soldier to have asked for asylum in Germany, although he would be the first to be receive it. According to the government, an application submitted by a US soldier in 2007 was later withdrawn. Shepherd said he thought many other soldiers would follow his example if Germany did approve is asylum request.

According to his lawyer Reinhard Marx, since Shepherd is still a member of the US Army, NATO statute says he could be arrested in Germany and sent before a military court. However, under the Geneva Refugee Convention Germany must provide him protection from seizure until a decision is made on his asylum application. Marx emphasized on Thursday that the Convention takes precedence over the NATO statute.

A US Army Europe spokesperson told The Local that the military would not be involved in the matter. “Matters involving the federal agencies of a sovereign foreign government and the status of U.S. citizens in foreign countries are matters for the State Department,” he said.

Based on State Department information that the spokesperson has, less than one percent of soldiers desert, usually for reasons other than conscientious objection, and numbers have reportedly gone down by several hundred soldiers since 9-11.

The US military does not actively look for deserters the spokesman said, but if they are returned to military authorities, they are subject to military law which punishes each case individually.

Politicians on the left side of the political spectrum called for solidarity with Shepherd. Hans-Christian Ströbele of the Green party wrote in a letter to the soldier that the military conflicts in Iraq and Afghanistan would only end when more soldiers “said ‘no’ in a similarly radical way to any participation in war.”

Parliamentarians of the Left Party and refugee organizations called on the federal government to support the asylum application. According to the asylum group Pro Asyl, Germany’s experience with National Socialism gives it a special duty “to respect the decisions made by conscientious objectors and deserters.”