The property, known as Fleur de Lys, boasts just under 4,200 square metres of living space, including 12 bedrooms and 15 bathrooms, and is modeled on Louis XIV’s palace at Versailles outside of Paris.

According to Forbes, the fact that a home valued at a mere $125 million ranks as the most expensive home currently on the market is a sign of the tough economic times.

The last time such an inexpensive home topped the Forbes list was back in 2005.

Saperstein took ownership of the estate following a messy and expensive 2006 divorce to self-made US billionaire David Saperstein, who left Suzanne to marry the couple’s 30-something Swedish nanny, Hillevi Svensson.

According to several media reports, David and Suzanne first met on a transatlantic flight in 1982 during which David professed his disdain for European women to Suzanne, saying they were “too hairy”.

The Swede, who according to the Aftonbladet newspaper originally hails from Krylbo in the central Swedish county of Dalarna, did her best to dispel the myth of hairy European women by throwing her leg up on David’s lap.

She then took David’s hand and guided it from her heel to thigh.

“Feel,” she commanded, according to Aftonbladet.

The two eventually wed and had three children.

During the 1990s, they oversaw the building of the Fleur de Lys estate, including its nine-car garage and 50-seat home theatre, in the exclusive Holmby Hills district near Beverly Hills.

Construction took five years to complete, but the couple shared the home for barely a decade before the two split, leaving Suzanne with the estate.

David and his new wife, originally from the tiny village of Bua on Sweden’s west coast, now make their home in Houston.

David, a former used-car salesman, made his fortune in the Texas town by starting a company that broadcast traffic information over the radio and then selling the firm to broadcasting giant Westwood One in 1999 for $1.25 billion. 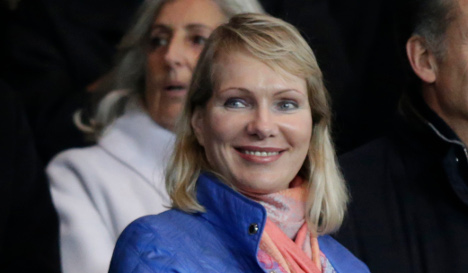 “The mother and babies are doing well,” the spokeswoman said in an email to AFP, confirming press reports at the weekend.

Louis-Dreyfus, who will be 54 in June, inherited the group Louis-Dreyfus Commodities, a 160-year-old giant in the world commodities business, after her husband Robert Louis-Dreyfus died in 2009. They had three boys including twins.

The father of the girls is Swiss banker Philipp Hildebrand, 52, who was head of the Swiss central bank until he resigned in a storm involving alleged insider trading on the currency markets involving his former wife.

He has since become a vice chairman of the US financial group BlackRock.