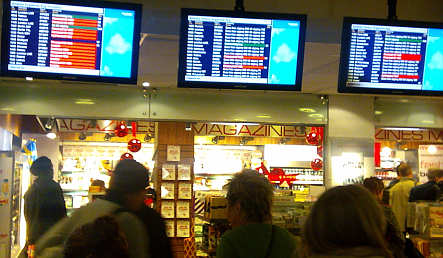 The majority of flights are delayed by around two hours, though the airport is urging passengers to arrive on time for their scheduled flights unless advised otherwise by their airline.

Up to date departure and arrival times can be found at the airport’s website.

The situation at the airport remained calm on Monday afternoon with most people sitting in the cafes and restaurants and waiting out the delay.

The general attitude is stoical, and most passengers The Local spoke to were not blaming the airport authorities.

“I’m delayed by two hours – so far – and there’s not much to do. I’m just having a sandwich, making a couple of calls and am planning on starting my laptop in a minute. I’m not too irritated,” said Lennart Christensson, flying to Berlin with Air Berlin on business for his company Transmotec, an electronics component company.

“When there’s so much snow, combined with wind, then this sort of thing happens. It would have been impractical to always have enough ground staff on standby to prevent it.”

“There are too few places to sit and work, but that’s the same in airports all over the world. They could have made internet connections free, though – that’s the least an airport can do in situations like this.”

Papa Ibrahima Diallo sat with his family outside a bookshop in Terminal 2 while waiting for a flight to Paris with Norwegian.

“We’re supposed to be flying at 13.30 and we’re officially half an hour delayed, but it might be more as we still haven’t got a gate. All you can do it wait and drink coffee. My son is just a toddler, but so far he’s doing OK.”

Sara from Uppsala, flying to Paris with SAS, said she was “a bit stressed” from standing around and watiing.

“We drove here from Uppsala, which was awful – we were doing 40-50 km/h all the way and could barely see the road. I was supposed to fly at 11.25, but so far I’ve been 2 hours delayed. What makes it worse is that they give so little information – you need to look the whole time. But I’m not cross – I know it’s down to the weather.”