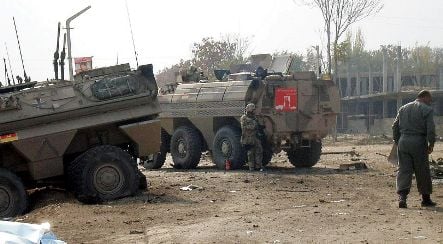 The scene of Sunday's attack on soldiers near Baghlan. Photo: DPA

The second attack in as many days inflicted mild injuries on four soldiers patrolling near the northern Afghan city of Fayzabad on Monday afternoon, the Bundeswehr reported. Several civilians were also reportedly injured in the attack, though no other details were available as investigation continued.

Meanwhile another soldier injured in an insurgent attack on Sunday was travelling back to Germany via Airbus “MedEvac.” He will land at midnight in the military section of the Cologne-Bonn airport, a spokesperson from the German medical command in Koblenz said.

He is not in critical condition and will be treated at the German military hospital in Koblenz.

The soldier was injured in an insurgent attack on Sunday morning near the northern Afghan city of Baghlan. The attacker set off an explosive device in a car on street, which exploded as a group of soldiers drove by in a transport tank. Another German soldier was also injured and remains in Afghanistan.

Germany currently has some 3,500 troops stationed in northern Afghanistan who have become the target of an increasing number of insurgent attacks as part of the NATO International Security Assistance Force (ISAF) mission there.

A suicide attack near Kunduz killed two German troops and five Afghan children on October 20, as a man blew himself up after approaching the German soldiers on a bicycle. The Islamist Taliban claimed responsibility for the attack against “invasion troops” hours after the incident.

The German Bundestag, or lower house of parliament, voted in October to extend Germany’s participation in Afghanistan and increase the number of soldiers deployed there to 4,500.