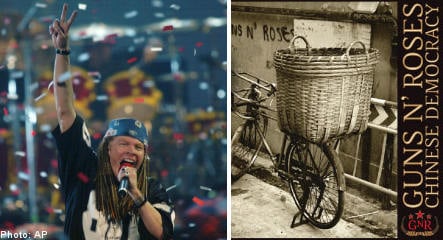 Organized by the founders of the Sweden-based GnrDaily.com fan website, the event has the backing of Universal Music Sweden and will allow fans to buy the long anticipated Guns N’ Roses album Chinese Democracy ahead of its official release in retail outlets.

“If you want to be the first person to buy the album you need to come to our party,” GnrDaily.com co-founder Tony Sjöman told The Local.

The official US release date for Chinese Democracy is Sunday, November 23rd, but in Sweden the album will be sold in stores a day early because, according to Sjöman, new albums aren’t released in Sweden on Sundays.

But getting the record a day ahead of fans in the United States wasn’t enough for Sjöman, who approached Universal Music Sweden about arranging a “pre-listening” party on the eve of the album’s Swedish release date.

“They thought it was a great idea,” said Sjöman.

The free event will be held at Rockbaren, a Gothenburg pub known for catering to rock fans and with a logo echoing that of the famed US whisky label Jack Daniels, a beverage long associated with Guns N’ Roses, according to Sjöman.

The first ten guests in line when the doors open at 6:00pm will receive a free copy of Chinese Democracy, although everyone else will have to wait until 10:00pm buy the album, which is being sold in cooperation with Bengans, Gothenburg’s largest record store.

Sjöman anticipates there to be widespread interest in the event.

“We expect there to be more people than spaces and lines outside the doors,” he said.

“As far as we know, we’ll be the first place where the album entire album is played officially for the public.”

“The idea is to find a way to allow people to listen to the album,” he told The Local.

The band has been working on Chinese Democracy since 1994, making the long-delayed record one of the most anticipated rock ‘n’ roll albums in recent memory.

Formed in Los Angeles in the mid-1980s, Guns N’ Roses achieved worldwide fame following the 1987 release of its first major-label album, Appetite for Destruction, which has sold an estimated 100 million copies.

Chinese Democracy represents the sixth studio album for the band, which has gone through a number of changes over the years, save for the band’s rambunctious founder and front-man, Axl Rose.

While Åberg warned fans not to expect Rose to show up at the event, Sjöman was more optimistic, although he admits it’s a long shot.

“We’re working on getting some of the band members to participate in the event, but nothing is set quite yet,” he said.

“He hasn’t officially said no.”

On a visit to Stockholm in 2006, Axl Rose was arrested after a wild night out and accused of assaulting a security guard and causing criminal damage to Berns hotel. The singer was fined 50,000 kronor.