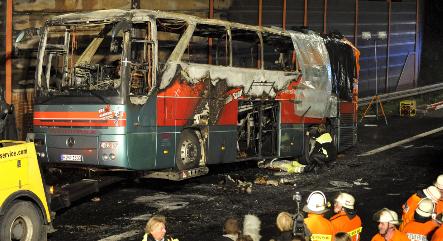 In Germany’s deadliest such incident in 16 years, the coach carrying 32 passengers returning late on Tuesday from a day-trip on a motorway quickly burst into flames just outside the northern city of Hanover, police said.

The driver pulled over, but in the panic to escape the flames rapidly engulfing the bus only 12 of the mostly elderly passengers, plus the driver, managed to get out in time.

Three of these were in a critical condition in hospital on Wednesday, Hanover police chief Uwe Binias told a news conference.

Police said initially that it was not the result of a crash with another vehicle but that it had been caused by one of the passengers smoking in the bus toilet who failed to extinguish his cigarette properly.

When smoke began pouring out of the toilet door another passenger opened it and there was a “violent explosion of flames,” rapidly setting the entire interior on fire, Binias said.

“It must have spread lightning-fast,” he said, adding that the investigation was not yet complete.

Some of the 300 rescue workers told local daily Hannoversche Allgemeine that the fire was the worst they had ever seen and that some of the bodies were so badly charred they could not be identified.

Poliec told the paper that only those sitting in aisle seats were able to escape and that the positions of many of the bodies indicated they were trying to get out when they died.

Television channel N24 cited a witness as saying that several walking frames had been recovered from the burnt-out vehicle.

The bus, operated by a Hanover firm, was returning from a day trip to the Prikings-Hof pig farm near Dortmund, 235 kilometres (145 miles) west of Hanover, a popular destination for coach trips with rustic food and music.

Thomas Rochell from Hanover criminal police told the news conference that so far only six bodies had been recovered.

He said that the task of recovering and identifying all the bodies would take “several days” as the bodies were so badly burned that they could only be identified using DNA extracted from their bones or using dental records.

He added that the job was made significantly more difficult by the fact that they were not sure of who exactly was on the bus, as the registration process for the trip had taken place in a rather haphazard manner.

“I am deeply shaken by the dreadful fate of the victims of the fire,” Transport Minister Wolfgang Tiefensee said late Tuesday. “My sympathies go out to their loved ones.”

He added that there had to be a “close” examination into what caused the accident.

If initial reports were correct that only a few passengers were able to escape the bus it would have to be investigated whether safety guidelines were adhered to and whether regulations should be strengthened, he said.

It was Germany’s worst coach accident for 16 years. In 1992, 21 people were killed and 35 injured in a crash in the Black Forest region of southwestern Germany.

In June 2007, 13 people were killed when a truck ploughed into a coach at full speed, sending it hurtling down an embankment before it landed on its roof off a motorway outside the central city of Halle.