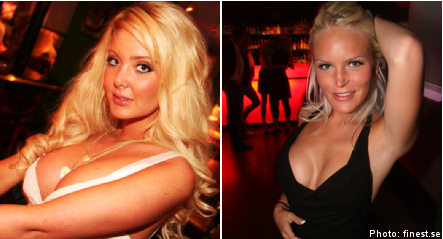 The incident in question took place last summer as photo models Anna Uhrdin and Andrea Felldin were driving home to Norrköping at 4:30am from a work assignment in Eskilstuna in central Sweden.

The pair are among Sweden’s most well known models, with Felldin having both posed partially clothed for the Swedish men’s magazine Slitz, as well as Playboy in the United States.

“I awoke hearing Anna scream, ‘Shit! A damn cop!’ I saw a police car behind us and had a feeling we were screwed,” wrote Felldin.

While Uhrdin slammed on the brakes, Felldin estimated that the vehicle was still traveling 20 to 30 kilometres an hour too fast as the police car pulled up alongside.

“We see him laugh and give us a little wink. Great I thought, there go my earnings for the night,” Felldin wrote.

But much to the models’ surprise, the officer kept on driving instead of pulling them over.

Uhrdin and Felldin thought they’d avoided a traffic citation until a short time later when the police car pulled up once again as the two enjoyed a cigarette at the side of the road.

“But he stops and rolls down the window…checks out me and Anna. I’m still dressed in my work clothes…a short skirt and very low-cut chemise, half see-through,” wrote Felldin.

Flustered, Felldin immediately blamed Uhrdin for the reckless driving, to which the police officer responded, “I have to say you drive like a real man,” according to Felldin’s account.

Chuckling, the officer said he understood that sometimes “people are in a bit of a hurry at this time of night when they want to get home to bed”.

Felldin then agreed to pose for a quick photo with the officer before he drove off.

“I think Anna and I learned a lesson, but it was really nice of the police officer in any case…many thanks!” wrote Felldin.

While Felldin thought the speeding incident was behind her, a recent rediscovery of the matter by the Swedish press has sparked debate about the police officer’s behaviour in the case.

“This may be a case of professional misconduct,” said Norrköping police commissioner Torbjörn Pettersson to the Corren newspaper.

A lawyer with the Östgöta police department in Norrköping added that the fact that the officer’s car wasn’t equipped with a radar gun doesn’t mean that he couldn’t have issued a ticket to the models.

“There are many different ways to measure speed, said John Zacharias to the newspaper.

He continued by pointing out that police officers are supposed to be impartial, but that there’s no rule against being friendly.

“It’s not prohibited to behave nicely, quite the contrary. But it shouldn’t mean that you assess things differently,” said Zacharias.

In a new blog post following the Swedish press reports, Felldin said she regrets posting her description of the event and maintains that the reason she and Uhrdin weren’t issued tickets was due to a lack of hard evidence.

“I write my blog for my friends and acquaintances. I want to apologize to the police officer in question and to all the police in Östergötland,” she writes.