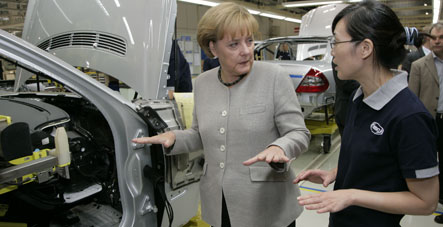 Merkel at a Mercedes factory in Beijing. Photo: DPA

“We know that we can influence events in Germany,” Merkel said at the conclusion of the Asia-Europe summit in Beijing. “Which is why the government will take measures where we can help specific sectors” that are troubled, she added without going into detail.

“We can see that trust in the financial markets has yet to be fully restored,” Merkel said, following another week in stomach-churning losses in world stock markets, during which major indices in Europe, Asia and the United States fluctuated wildly.

She also called for a reform of the battered financial system — including substantially more oversight — as the only way to prevent future crises of this nature.

The DAX in Frankfurt dropped at times by nearly 10 percent on Friday before recovering, ultimately closing down close to five percent as news about falling corporate profits and rising jobless claims dogged investors.

Germany’s finance minister meanwhile grimly predicted that the financial crisis will last at least until late 2009, and it will take years for Germany to gauge the ultimate costs of its rescue plan.

“The risk of collapse is far from over. It would be wrong to lift the

The €480-billion ($610-billion) rescue package for banks approved a week ago is to last through next year, “and we will certainly need it for that duration,” he predicted.

“We won’t know whether the rescue plan will entail real costs until between 2010 and 2013,” he added.

German banks have so far been reluctant to ask for state aid under the rescue plan, with one analyst suggesting they are wary of losing autonomy and of being stigmatised by their peers.

But state bank BayernLB this week asked for a capital injection of 6.4 billion euros, including 5.4 billion euros from the federal government, the first bank to have applied for help under the government scheme.

How many people are going to benefit from the increase?
According to the Hans Böckler Foundation’ Institute of Economic and Social Research (WSI), a trade union-linked research foundation, there are at least 6.64 million people who were earning less than €12 per hour before the increase. This includes 3.5 million women and 2.7 million men.

Will this mainly benefit people in full- or part-time work?
If we look at the number of hours worked, we can see the following picture: 1.4 million full-time employees will get a boost to their earnings, and 1.8 million part-time staff and three million people with so-called ‘mini-jobs’ will earn more per hour. A mini-job is where you can either earn a maximum monthly sum or work for no more than three months/70 days per year. Those who only have a mini-job don’t have to pay social security contributions.

The upper earnings limit for people with mini-jobs also rose on October 1st. People can now earn a maximum of €520 per month, up from €450/month previously.

READ ALSO: The rules in Germany around mini and midi jobs

Does the increase have anything to do with the current energy crisis?
No. The coalition government had already planned this before Russia invaded Ukraine and the resulting energy crisis. After the Bundestag (lower house of parliament) passed the draft law on June 3, 2022, it was confirmed by the Bundesrat (upper house) on June 10 where concerns about the cost-of-living crisis played a key role in the final debate. At that time, several politicians warned that spiralling energy prices and inflation were making many people’s living situations untenable. The government has since introduced other initiatives to help people cope.

READ ALSO: Wohngeld: How people in Germany can get help with rising living costs

In which sectors will the increase have the biggest impact?
More than 60 percent of people working in the hospitality sector will be affected by the increase. According to government data, 46 percent of those working in the agricultural and forestry sector were earning below €12/hour. Thirty-two percent of those in the property sector and 29 percent in the transport and warehousing sector also earned less than the minimum wage.

What are trade unions and employers’ associations saying about the hike?
The German Trade Union Confederation (DGB) has been pushing for an increase for a long time. DGB head Stefan Koerzell recently called the step “a ray of hope in these difficult times”. But the Confederation of German Employers’ Associations’ BDA called Labour and Social Affairs Minister Hubertus Heil’s draft law for the increase of the minimum wage “extremely questionable” from a political and legal perspective. The BDA’s criticism was not targeted at the increase itself, but rather the fact that it was the legislator who was deciding on wage increases instead of employers and trade unions.

What role do trade unions and employers’ associations play when it comes to the minimum wage?
Normally a big one – they sit on the minimum wage board. This committee normally proposes the incremental increases for the base hourly salary, which was introduced in 2015 – it then stood at €8.50. The new legal increase to €12 is outside of this usual mechanism, but the coalition government has promised that after this, the minimum wage commission will be responsible for future increases once again.

READ ALSO: Everything that changes in Germany in October 2022