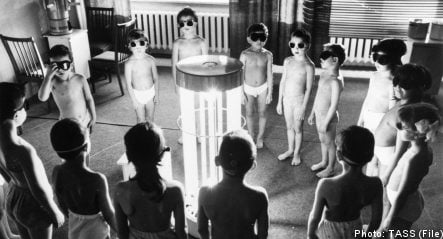 With the bleak Swedish winter looming and the end of Daylight Saving Time arriving on October 26th, the sunny days of summer are long gone.

While most people see the dull days of winter as just a dreary dampener of spirits, for some the darker months are a much more serious issue.

Seasonal Affective Disorder (SAD) is a psychological disorder characterized by depression, tiredness, decreased motivation, a tendency to sleep excessively and a craving for carbs and sweets.

In severe cases, sufferers may experience intense anxiety and irritability, and the condition can even lead to suicidal tendencies.

As Jerker Hetta, Professor in Psychiatry at the Karolinska Institute in Stockholm explains, SAD is a serious issue in Sweden:

“I would expect that about 8-10 percent of the Swedish population do experience some form of SAD, with more extreme cases constituting 4-5 percent. Although these figures are complicated by the fact that some people displaying depressive symptoms over the winter months may already have pre-existing psychiatric problems.”

While there is no conclusive answer for what causes SAD, the symptomatic cycle of the condition is typically related to seasonal changes in the amount of available sunlight.

This may be due to the role circadian rhythms play in the regulation of the hormone melatonin in our bodies.

The suprachiasmatic nuclei (SCN), which can be thought of in terms of the body’s ‘master clock’, responds to changing light levels during the course of the day. The SCN, which is located in the hypothalamus in the brain, transmits information taken from the retina to the pineal gland.

This small cerebral gland regulates and secretes the hormone melatonin. Melatonin is thought to control the body’s response to sleep or wakefulness, with levels of the hormone being highest just before bedtime.

Sufferers of SAD have been reported to have abnormally high levels of melatonin during the dark winter months.

And Sweden does have more than its fair share of dusky days. The most northerly regions of the country experience the Arctic phenomena of polar nights, where the land is thrown into darkness for weeks at a time.

Although this is the extreme hand of the Swedish winter, the more southerly cities of Stockholm and Gothenburg can expect low light levels and short days for what Swedes refer to as “the winter half” of the year.

The dreariness of Sweden’s winters compared to its south European neighbours was documented as long ago as the 6th century. Roman chronicler Jordanes described the inhabitants of northern Sweden and Norway in his text Getica, written in Constantinople in AD 551.

According to Jordanes, the inhabitants of the region “are said to have continual light in midsummer for forty days and nights, and who likewise have no clear light in the winter season… By reason of this alteration of sorrow and joy, they are like no other race in their sufferings and blessings.”

For those SAD sufferers who do indeed find it a sorrow to bear the long winter months in Sweden, phototherapy may be a ray of hope. Better known as light therapy, phototherapy has been used in Sweden for years as a means of combating SAD.

Phototherapy is most commonly administered through the use of a light box which emits a measured amount of balanced spectrum light from fluorescent tubes.

However, as the professor explains, there is no conclusive medical proof for the effectiveness of phototherapy.

“It has not been properly demonstrated as to how best light therapy should be delivered… Scientifically we don’t really know how effective light therapy is.”

Preliminary studies have suggested that a daily ‘dose’ of 30 to 60 minutes in front of a light box affects the production of melatonin, thereby regulating the circadian and seasonal rhythms of the SAD sufferer.

Light boxes can be easily purchased from the internet for home use, but there are other options. The Iglo Lightcafé, opened in Stockholm in 2004 by Martin Sylwan, is Sweden’s and possibly the world’s, first light cafe.

Rather than sitting next to a light box, the idea of the Lightcafé is that the whole room is illuminated with constant, unshadowed rays. On entering the cafe, visitors don white robes and are able to buy food and drink or even take breakfast.

“I think it’s a great way to treat SAD,” says Sylwan. “From the people I’ve spoken to, it really helps.”

Sylwan explains what made him start up the Lightcafé: “When I personally suffered from depression, light therapy was prescribed by my doctor. The treatment was in the psychiatric ward of a hospital and although I found the treatment helpful, I really didn’t like going there.”

Finding medical institutions “in no way a positive experience”, Sylwan decided to create a more relaxing environment for light therapy.

“Many working environments are not properly lit and there is not enough natural light from windows during the dark season. This makes people suffer, and for some it can be a real handicap,” he says.

If the thought of light therapy doesn’t appeal, then Hetta offers some common sense advice to those who feel the onset of the blues with the darkening days: