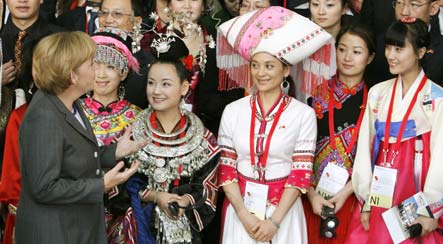 A file photo of Merkel with Chinese youth in Berlin on October 13. Photo: DPA

The main aim of Merkel’s visit is to take part in the Asia-Europe Meeting (ASEM) in Beijing on Friday and Saturday, but on Thursday she will also meet Prime Minister Wen Jiabao and later President Hu Jintao. In doing so Merkel is one of the few leaders from the 40 or so attending the summit – which is expected to be dominated by the financial crisis – using her visit to hold bilateral talks with senior Chinese officials.

“I think that (with this visit) Merkel would like to make a signal as chancellor that there is a normalization of relations between China and Germany,” Barbara Unmuessig from the Heinrich Boell Foundation told AFP.

Merkel’s decision to receive the Dalai Lama in September 2007 at the chancellery in Berlin was not well received in Beijing, and the resulting chill in relations between China and Europe’s biggest economy took some time to thaw. China takes a dim view of foreign leaders meeting the exiled Tibetan spiritual leader, whom they accuse of masterminding riots against Chinese rule in Tibet and neighbouring areas in March – a claim he denies. Beijing responded by cancelling a number of planned German-Chinese political meetings and joint cultural events, and there were fears that German businesses would suffer.

But thanks in part to efforts behind the scenes by Foreign Minister Frank-Walter Steinmeier to repair ties, relations have steadily improved and in June China’s Foreign Minister Yang Jiechi declared they were back to normal. Business ties, which analysts say never suffered in any case, have continued to go from strength to strength, with German exports to China rising by a fifth in the first half of the year.

But Germany joined other Western countries in criticizing China’s crackdown in Tibet in March and neither Merkel nor Steinmeier attended the opening ceremony of the Olympic Games in August – unlike US President George W. Bush and France’s Nicolas Sarkozy.

Merkel last met with Hu at a Group of Eight summit in Japan in July and she used the talks to push for a successful outcome to talks between China and the Dalai Lama, and according to officials in Berlin she will not shy away from “critical issues” this week either.

But analysts said she will have to tread carefully in Beijing if she is to keep China on board for a planned global summit including both industrialized countries and emerging nations – which will be at the forefront of the ASEM summit.

“Merkel’s trip now is all the more important because when it comes to resolving the financial crisis China plays a very central role. If the Chinese don’t play along then you can forget about the whole clean-up and crisis management,” Unmuessig said.

“The Chinese must be at the table if there is to be a world financial summit to restructure the global financial system … I think that Merkel must think about whether she shouldn’t go back to the traditions of quiet diplomacy,” she said.