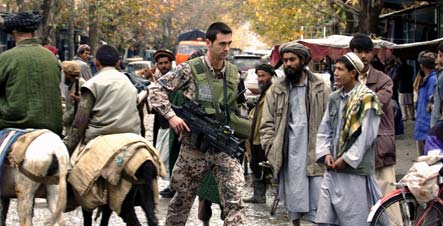 “It was wrong only to play the military card,” he said. “The USA has failed in this way. At the same time, civil reconstruction is failing because many countries were too hesitant.”

The German government coalition claims that the country’s main objective is to put 80 percent of its efforts into civil reconstruction, Kirsch said, but in actuality, 80 percent of the resources go to the military. “That is a lopsided position,” he added.

Germany has also not fulfilled its plan to train Afghan police, Kirsch said, because its programs have not produced enough officers.

Chancellor Angela Merkel should name a date for the end of German deployment in Afghanistan, he said.

A suicide attack near the northern Afghanistan city of Kunduz killed two German troops and five Afghan children on Monday as a man blew himself up after approaching the German soldiers on a bicycle.

The Islamist Taliban claimed responsibility for the attack against “invasion troops” hours after incident.

Germany currently has some 3,500 troops stationed in northern Afghanistan who have become the target of an increasing number of insurgent attacks as part of the NATO International Security Assistance Force (ISAF) mission there.

Last week the German Bundestag, or lower house of parliament, voted to extend Germany’s participation in Afghanistan and increase the number of soldiers deployed there to 4,500.