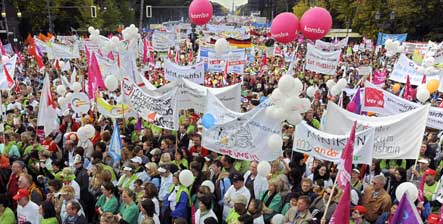 Brought in by over 600 buses and dozens of special trains, tens of thousands of protestors came to what organisers said was the biggest protest by hospital employees in postwar Germany.

Critics say this falls way short of what is needed and could force hospitals in Western Europe’s most populous country to close their doors. According to Rettung der Krankenhäuser (Save the Hospitals, or RdK), an umbrella group representing healthcare unions and employers, the sector has a €6.7-billion funding shortfall for 2008 and 2009 alone.

In the past decade, one in ten hospitals in Western Europe’s most populous country have been forced to shut due to lack of funds. One in five hospital beds has disappeared in the same period while the number of patients has risen by 17 percent, and a third of Germany’s almost

2,200 state and private hospitals are currently in the red.

The authorities are “not providing enough funding for treatment, drugs and sufficient personnel,” the RdK says, and funding cuts and rising costs “are pushing hospitals more and more into a hopeless position.”

The RdK says that 11,000 jobs are at risk next year, on top of the 100,000 that have already been lost in the past decade. It is not the federal government that pays directly for the country’s hospitals – the bill is picked up by Germany’s 16 states, by local authorities and by public health insurance funds.

According to Gerd Billen, head of Germany’s association of consumer federations, Germany has “too many hospitals and too many beds”, more per capita than in France and in other European countries.

“We spend €50 billion on hospitals every year. I think we could save four to five billion annually,” Billen told DeutschlandRadio.