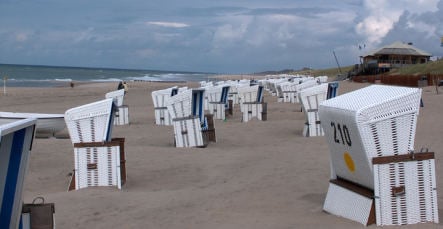 Shaped like a giant anchor on its side with 40 kilometres of pristine beach and rolling dunes, the Sylt has long been Germany’s glamour beach resort of choice.

Here, the sky is huge and the water extends to the horizon. The clouds move fast, the weather changes quickly, the winds are strong and the rain is often slanted. It’s stylish, yet dated. Natural and wild, yet over-developed and hastily built. Subtle yet arrogant – almost like the island is showing off while hiding under a quaint thatched roof.

So is Sylt was some sort of high-style Teutonic Riviera or simply some pretentious place for Germans too provincial or too poor to jet down to the south of France or Sardinia’s Costa Smeralda?

It’s 11 am in the morning on Friedrich Strasse in the island’s largest town Westerland, and the parade has already begun. Dressed in their holiday finery, they’ll march up and down this street until well after sunset, as if perpetually searching for an empty table in a café and for a free stool at the famous seafood eatery Gosch. Those walking are watching those sitting and vice versa. There’s a lot of judging going on, with the street value of certain outfits and accessories loudly estimated over half-drunk cups of coffee.

The street is packed, with some rushing towards the beach as a slither of sun breaks through the chalky clouds, and others intent on being part of the parade. But everyone is out and about, clicking Nordic walking sticks on the pedestrian streets, or scoffing down Fischbrötchen from Gosch and Blum’s.

The locals are out, setting up stalls and fleecing tourists with overpriced fleeces. The waiters are out, slipping between tables and chairs that are very close together and serving with a sneer. And the Porsches are out on the busy roads, heading north to the branded boutiques and posh bars of Kampen or south to the swanky Sansibar restaurant – perhaps even to both. If you’ve got a Porsche and are driving on Sylt, you probably imagine your bragging rights increasing logarithmically if you’re seen at both places on the same day.

Yep, the town is a hive a beach-side activity and well-rehearsed posing. The only thing not out is the sun. Nonetheless, the beach in Westerland is full and finding an empty Strandkorb will be a fruitless search, as the best ones were taken at 6 am. On cloudless summer days, barely a grain of sand is left uncovered. The long beach promenade is also full, and there are more than a few white-legged visitors with socks and sandals and plenty of couples with matching jackets.

“We live from the tourists,” says Sven of the Brandenburger Strand Surf School. “But sometimes, I never want them to come back again.”

If Westerland is a jammed beach resort slightly mired in the 1980s (those high rise apartment blocks are unsightly), down at the Sansibar, it’s all high style. The car park looks like a luxury auto show and the patrons have seemingly all stepped out of yachting catalogues. The dress code here could be called “pretentious nautical,” with sock-less deck shoes that squeak and windproof sweaters that have never seen a yacht. But no visit to Sylt is complete without venturing to the island’s most famous restaurant – even if there are nicer places near Kampen with beach views and a less uptight atmosphere.

Kampen, located eight kilometres north of Westerland, is the island’s main draw, both for the glamorous and those trying to be. On Whiskey Street, the fumes of perfume and petrol are thick, the bars are packed and the world’s leading brands are houses here have thatched roofs. It seems there’s a gate at either end of town preventing any vehicles other than massive SUVs and low-slung sports cars from entering.

There might also be a fashion police forcing polo shirt wearers to turn their collars up and fining girls if their sunglasses are too small. Extreme stilettos have the girls listing to starboard and their make-up is wind-resistant. It’s all very fashionable and upmarket, but there’s also a quiet sense that most of the people are trying too hard.

For a more attractive and artistic place head to Keitum, five kilometres east of Westerland. Here, the posing of nearby Kampen is forgotten as the narrow streets lead to century-old Frisian houses with typical thatched roofs and barn doors open to small galleries and artists’ workshops. Sylt’s cultural corner is an easy day trip from Westerland on a rented bicycle. There’s the 800 year old St Severus church, the Old Frisian House and Sylt Museum. But more, there’s the peace and quiet away from the island’s bustle and prancing.

On the east coast, a path leads to Munkmarsch, to the Fährhaus Hotel, which makes for a good stop for tea and cake. Sylt is famous for tea, and whether herb, fruit or black, it’s brewed strong enough to make you smack your mouth with delight. Another good spot is the Kupferkanne just north of the Braderuper Heide.

One can eat and drink exceptionally well on Sylt. The best restaurants are attached to the island’s finest hotels, namely the Fährhaus in Munkmarsch, the Benen Diken Hof in Keitum, the Landhaus Stricker in Tinnum and the Dorint Söl’ring Hof in Rantum. But you can eat well even on a budget.

A visit to Gosch, Sylt’s famous purveyor of seafood, is part of the daily routine. List, Germany’s northern-most village, is home to the original Gosch as well as to Dittmeyer’s Oysters. Denmark is a short ferry ride away and the Danes like List quite a lot. Busloads of them head out to the Ellenbogen, or elbow, the rugged stretch of dunes at the northern tip of the island. They’ll return to Gosch afterwards, for List’s claim to fame is as much a rite of passage as the Sansibar, albeit with a rather different crowd.

To the south, the island narrows, sometimes barely 400 metres wide. The nature reserve of Rantumbecken is a dam that was built by the German Army in 1936 as a marine airport. A narrow dyke covered with sheep hugs the east side all the way to Rantum. Almost forgotten, and perhaps not long from becoming an island itself is Hörnum, the village at the southern end. As the island is eroding naturally, a stretch of this narrow finger of land may soon be permanently underwater.

For now, though, Sylt remains intact and exceedingly popular. The recent increase of flights to Westerland Airport may even make Sylt into an international holiday destination. There are currently connections to all major German cities plus direct flights to London, Milan, Vienna, Zurich and Palma de Mallorca. More traditional is the train, three hours from Hamburg Altona. As there is no road to the island, your Porsche will have to be put on the train in Niebüll for the 30 minute journey to Westerland.

The airport may result in the development of a real German Riviera – or it could mean the end of Sylt as an idyllic, if paradoxical, island getaway. No frills flights might turn it into a package tour destination or, worse, into the next haven for bachelor parties. For the time being, however, it will remain the revered German beach resort with that edge of glamour.

Just getting a bed is a challenge in high season. The best accommodation on offer is a toss up between the Benen Diken Hof, the Landhaus Stricker and the Fährhaus.

Everyone goes to List and the two in Westerland are always full, but the best Gosch is on the beach in Wenningstedt. Great seafood and a great place to watch the sunset.

Everyone’s at the Sansibar which means other beach bars are less frequented. The best is La Grande Plage. The restaurant has a deck facing the ocean and a sauna.

The sport of Bossel. A bit like golf, but with throwing. Teams try to get their wooden ball across a certain cross-country route in the least number of throws.

The Gourmet Festival held in January. It includes the Gourmet Safari, where guests take a limousine to all points on the island to savour wine and specialty dishes.