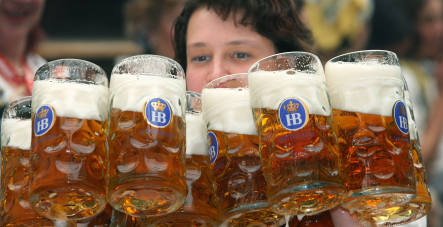 Another cold one? Maybe a Glühwein instead. Photo: DPA

Festival spokeswoman Gabriele Papke said on Wednesday that Oktoberfest has to cope with winter-like temperatures every four or five years, but the last Winterwiesn was in 1994.

Aware that visitors might not be too keen on chugging cold beer in frosty temperatures, organizers may even allow the sale of Glühwein – warm mulled wine traditionally served at German Christmas markets.

“If temperatures fall under 10 degrees for three days in a row, Glühwein may be served,” Papke said, adding that the exception was only for small stands and not the large beer tents.

Oktoberfest, billed as the largest party in the world, starts on Saturday and runs through October 5.