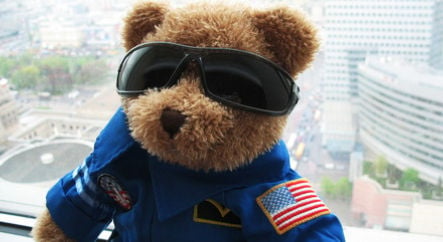 What is the idea behind Where’s My Teddy?

In short, it’s international adventure without having to leave the comfort of your armchair. We wanted a way for parents, families and teachers to help their kids discover more about the world in which we live, and link them up with other like-minded people from across the globe. We also wanted to do that in a cool and non-boring way, so that we could encourage the kids themselves to learn about other people and other cultures.

As the founders of Where’s My Teddy, and being ex-pats ourselves, we wanted a fun way for our internationally-based families to stay in touch. Seeing as Garden Gnomes has already been done, keeping track of globe-trotting teddy bears as they roam the world was the alternative solution we came up with.

Who are the people behind the project and what’s the Swedish connection?

Richard Dickson and myself, Michael Taylor. We’ve both married to Swedish partners and we’ve both been in Sweden for almost a decade. We wanted to break out of the nine to five world in order to strike out on our own. We both travel a lot too, so a web-based company that you could run from anywhere seemed the ideal work-around for both of us.

Why would you recommend people to invest in a teddy?

To have fun, stay in touch with family and friends, and make some new ones. For parents, grandparents, and teachers its a great way to get your kids interested in the wider world. There’s nothing else quite like it on the web – we’re unique!

How many teddies are there in circulation?

So far only a handful, but we’re working on it. We’ve got schools interested as far away as Brazil, Ghana and the USA already, even though we’ve only been up and running a month or two. They’ll be online shortly. We’re also joining up with some international school based projects, such as ePals in the USA and Connecting Classrooms in Africa.

Have any of them begun their journeys in Sweden?

The majority of bears have started in Sweden. We are both Stockholm based, so the first batch of test bears were mainly launched from here. However, we have a big fan in Berlin who keeps buying teddies for family and friends, so we’ve got a few starting out from there too. They’ve only been on the road a short while, but most of the teddies are already fairly well spread out across the globe. It’s great fun checking out what the bears have been up to, meeting Big Chickens, visiting the Florida Space Station, going to weddings, etc.

What’s your question for our readers?

What is the total number of countries Bill Bear has visited since his launch in Stockholm?

Where can people go to research the answer?

Update: September 25th, 2008 – The competition is now closed. Nine lucky winners will be receiving their bears in the post very soon.