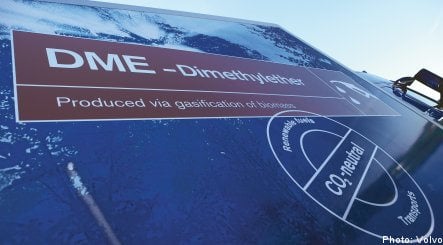 Produced from the gasification of black liquor, a by-product of the paper and pulp industry, DME is big news in the field of biofuels.

As Kjell Andersson, Information Director for The Swedish Bioenergy Association (Svebio) comments: “If we have a DME plant at every paper mill in Sweden, we could produce enough biofuel to substitute one third of the country’s diesel fuels”.

Construction has commenced on a large DME production facility at the Smurfit Kappa mill in Piteå, which once fully operational will produce 4-5 tons of biofuel daily.

“It’s very promising,” says Andersson. “Black liquor is a very large resource as about half of the energy content in wood pulp ends up in liquor and this should be tapped”.

As part of a consortium of seven partners, Volvo has co-financed the innovative BioDME project, along with the EU’s Seventh Framework Programme (FP7) and the Swedish Energy Agency. With a budget of 265 million kronor ($390,000), the scheme aims to establish the entire chain from raw black liquor to engine fuel. Within 18 months, Volvo aims to have the first of 14 DME run trucks ready and petrol station giants Preem will have set up 4 fuel stations.

“We have the technology for DME-powered engines ready. We just need to see evidence of the sustainability of the business in a broader way, such as distribution and filling stations, before we can start large-scale commercial vehicle production” says Volvo spokesman Pär Aronsson.

The development of biofuels is vital if Sweden is to achieve its aim of radically reducing its oil dependency by 2020. Göran Persson, former Prime Minister and spokesman for the Commission on Oil Independence notes in an official report how “the extensive burning of fossil fuels threatens the living conditions of future generations. Climate change is a fact which we politicians must face. Broad and long-term political efforts are needed”.

An increase in the use of biofuels also spells success for Sweden’s economy. A statement by the Commission on Oil Independence asserts that “we can also secure our supply of energy, strengthen our economy and promote the development of sound growth driven by technology and environment, with new business opportunities for Swedish industry. In short: the phase-out of oil can further strengthen our position as one of the world’s leading nations in sustainable development”.

Having already been used for decades as a propellant in aerosols, DME is non-carcinogenic, non-mutagenic and virtually non-toxic. It burns soot-free and engines run on DME have, amongst other benefits, ultra low exhaust emissions, low engine noise, high fuel economy and produce low amounts of CO2.

Only minor modifications need to be made to a standard diesel engine to allow it to run on DME and it certainly shows a lot of promise as a green fuel of the future. However, getting the large factories on board could be difficult, as Andersson explains:

“The technology could be used at every big factory, but they are extremely capital intensive. It is a big thing for them to change. It might be hard to get the mills to make this sort of investment”.