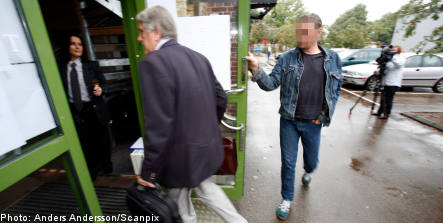 Sixteen fishermen stand charged in Varberg District Court in southwestern Sweden of illegally pulling in 109 tonnes of cod in 2005 and passing it off as pollack in order to circumvent strict EU quotas limiting cod fishing.

A purchaser of the fish also stands accused of facilitating the scam, which allowed the fishermen to make an additional 1.83 million kronor ($286,950) in total, according to court documents obtained by AFP.

The indictment covers 143 landings by nine boats in ports on the Swedish west coast county of Halländ in early 2005.

The case is serious, according to the Swedish Board of Fisheries, since the illegal fishing puts further pressure on dwindling cod stocks in the Kattegat strait.

“Cod is very vulnerable … In this case, one has in principle expanded the (legal) quota by 12 percent, which of course can have serious (environmental) consequences,” the board’s control chief, Johan Löwenadler, said in an interview on Swedish public radio.

Two of the fishermen have admitted to passing cod off as unquotaed pollack, according to their lawyer Björn Breitfeld.

The two men had inadvertently caught large quantities of cod when they were aiming to catch other fish species, he told Swedish radio, pointing out that they had had the choice of tossing the already dying fish back into the water or admitting that they had overfished their quota.

“But then they … found out that they could, through the fish purchaser, file the catch under a different category, in this case pollack,” he said.

“They did it a few times, but this is of course not something they would do again or are proud of,” Breitfeld added.

Prosecutor Håkan Larsson however said he did not believe the cod was caught by mistake, noting that the scheme stopped abruptly following a letter from the Board of Fisheries specifying they were planning to carry out a check to verify catches.

He has so far called for each of the fishermen to be fined the sums they made on the illegal fishing, but still has the option to request sentences of up to two years in prison if they are found guilty.

The trial is expected to take 18 days of hearings, and is scheduled to wrap up on October 10th.

The verdict will be announced at a later date.