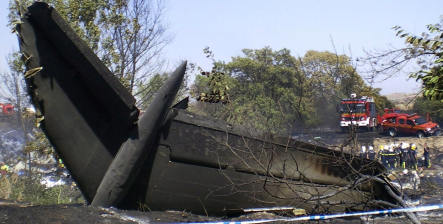 Officials said on Thursday the Bavarian couple and their two sons checked in for ill-fated flight, which was a Lufthansa code-share trip with Spanair.

“We only know that the four names of Bavarian citizens are on the passenger list. But we don’t know what has happened to them,” said Ludwig Waldinger from the Bavarian state police.

He said the family was still considered only missing, but Spanish officials have asked for DNA samples and the family’s home has been sealed off by local police.

Earlier on Thursday, Germany said forensic experts from the country’s federal police (BKA) would help identify the victims of the horrific crash.

A spokesman for the German Foreign Ministry said Spain had accepted an offer for help from the BKA and they had confimred Germans were on the flight.

“We have received indications from the Spanish authorities that four Germans were among the victims,” he said.

Lufthansa said late on Wednesday that seven people bought tickets through the German carrier for the Spanair flight. Four of the passengers arrived in Madrid from Germany for the ill-fated connecting flight to Las Palmas in the Canaries.

The airline, which operates a code-sharing agreement with Spanair, was unable to confirm if any of the German-registered passengers were among the dead or if they boarded the flight. It said it had sent a team offering psychological help to assist the jet’s operators Spanair deal with victims and families.