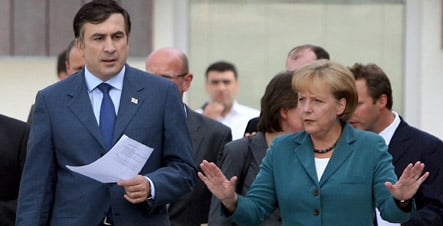 Saakashvili and Merkel at their joint press conference. Photo:DPA

“Georgia will become a member of NATO if it wants to – and it does want to,” she said in a strong statement of support for Georgia’s intention to join NATO, which is fiercely opposed by Russia.

Merkel was in Tbilisi to support Saakashvili and press for the withdrawal of Russian troops who attacked Georgia on April 8 to repulse an offensive by Georgian troops against a Moscow-backed separatist region. Russian troops remained deployed in the north and west of the country, including units within half an hour’s drive of Tbilisi.

“The withdrawal of Russian troops is now of upmost importance,” Merkel said after meeting Saakashvili.

Russia says that regular forces will begin withdrawing Monday but that an unspecified number of Russian peacekeepers will remain. Moscow is furious at Georgia’s attempt to join NATO. The Western military alliance is divided over how fast to accept Georgia, but has indicated that

membership is a matter of when, not if.

Merkel’s unambiguous backing of Georgia’s NATO ambitions is a turnaround from her scepticism four months ago, when Germany and other European countries torpedoed Tbilisi’s hopes of joining the alliance any time soon for fear of provoking Russia.

Merkel met Russian President Dmitri Medvedev on Friday, criticizing Moscow’s actions during the week-long war between Russia and Georgia over the breakaway region of South Ossetia.

She reportedly wanted to give Saakashvili something of a dressing down too, for wrongly second-guessing Russia’s reaction to his sending troops into the area, according to the Frankfurter Allgemeine Sonntagszeitung. At the same time though, she is keen for her visit to Tbilisi to be seen as a gesture of support for Saakashvili, who the German government recognizes as legitimately and democratically elected.

And German Foreign Minister Frank-Walter Steinmeier warned on Sunday against any knee-jerk reaction to the Caucasus conflict in relations with Russia.

“I do not advise … any knee-jerk reaction such as suspending talks on a partnership and cooperation agreement (with the European Union). That would signify that such an agreement is more important to the EU than to Russia,” Steinmeier said in an interview with weekly Welt am Sonntag.

“Or Russia joining the World Trade Organization (WTO): our interest in this is as great as Russia itself. Talks in the NATO-Russian Council are essential too. Because we need open lines of communication – to Tbilisi and to Moscow,” Steinmeier told the paper.