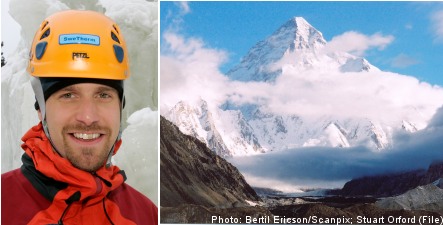 The mountain peak, also known as K2 or Mount Chogori, is situated on the China-Pakistan border in the Karakorum mountain chain.

Disaster first struck on Friday evening, Swedish time, as Sträng and his team were scaling the mountain peak at an elevation of 8600 metres.

Upon learning of the avalanche, Sträng’s team broke off its ascent and went to help another group to safety after one of its members had been killed.

As they climbed down, another climber lost his life and Sträng almost went down with him, according to the climber’s spokesperson, Joachim von Stedingk.

Speaking to TT, von Stedingk explained that as Sträng was preparing for a second attempt to reach the summit, parts of the ice wall called Bottleneck Couloir slammed down.

“This avalanche caused a further two deaths and at least eight people are completely cut off now. How they will come down now nobody knows.”

Fredrik Sträng is the only Swede on the expedition and all of his eight team members are safe.

Right now, his team is climbing down to a lower level with injured and shocked climbers.

The teams are presently at 7500 metres, which significantly worsens rescue services’ chances of helping them.

“The low air pressure means that it isn’t possible to fly a helicopter at those heights. In addition, your muscle capacity minimizes significantly, as well as your mental capacity”, von Stedingk told TT.

Sträng is an experienced climber who has holds a record as the only Swede to have climbed seven of the Earth’s highest peaks in the world within six months.

The K2 peak is regarded as one of the world’s most challenging and dangerous mountains to climb.

Sträng´s current expedition is in aid of raising awareness for Sweden’s charity Help the Children.