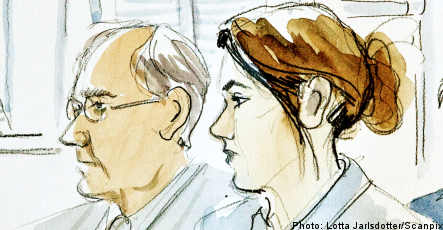 A report, made public at the trial, confirms that the hair found in Emma Jangestig’s hand did not belong to the 32-year-old German suspect, Christine Schürrer

Schürrer is suspected of attempting to murder 23-year-old Jangestig and of murdering her two children, Max and Saga, in Arboga on March 17th.

An analysis by the National Laboratory of Forensic Science (SKL), presented on Wednesday at the trial ruled out that the hair found in Jangestig’s hand belonged to Schürrer.

Instead, the report concludes that the hair most probably belonged to the victim herself.

The report also confirmed that the cat hair found on Schürrer’s clothing does not come from the cats who lived with Jangestig and her family in Arboga.

The strongest forensic evidence which remains available to the public prosecutor, Frieda Gummesson, is a pair of footprints that will be used to try to establish that Schürrer had been in the house in Arboga on March 17th.

The footprints are from shoes that Schürrer is alleged to have owned but they have not been found.

Frieda Gummesson said in court on Wednesday that Schürrer had been planning the murder for more than two months, arguing the motive for the murders was jealousy.

Gummesson contends that, during questioning, Schürrer attempted to tone down her latent feelings for Jangestig’s boyfriend after their relationship ending.

The prosecutor believes that Schürrer’s past psychological problems, including several suicide attempts, are tied to the break up.

Gummesson also referred to the disappearance of a hammer from the Stockholm-area apartment where Schürrer lived in January.

That landlord responsible for the apartment discovered her hammer was missing early in the year when she planned to remove some nails and couldn’t find the tool.

Gummesson claims that the fact that the hammer was missing back in January shows that Schürrer had been planning the murder several weeks before it was carried out.

“She had already then planned to use it (the hammer) on the children and their mother,” Gummesson said.

In February, Schürrer contacted her ex-boyfriend and said he’s given birth to his child, and that she had given it up for adoption.

But police have been unable to find any evidence of the alleged child.

Police have also traced emails which were supposedly sent by the children’s adoptive father to Jangestig’s boyfriend to a computer in the Stockholm apartment where Schürrer was living.