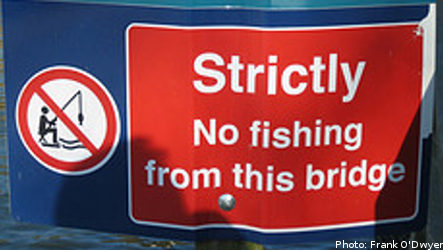 The local town council is now set to ban fishing in the area.

When Per Pettersson swam out into Kroppkärr Lake near Karlstad in central Sweden on Sunday he felt something pull on his neck.

It became hard for him to breathe and he started to get pulled backwards, towards the shore.

“It felt like I was being strangled in the water. I was wrenched backwards by the fishing line and the pike hook got caught in my throat,” said Pettersson to the Nya Wermlands-Tidningen newspaper.

Pettersson grabbed at his throat and was able to detach the spinner’s hook but was left with a bleeding neck.

He looked down to discover a pike trolling spoon in his hand, he then realized that it was still attached to a fishing line.

Pettersson felt a further pull, looked up, and saw a fisherman reeling him in from a ridge some distance away.

He then released the hook to avoid any further injury to his hand.

The incident occurred in front of a nearby swimming area which is only separated from the ridge by a clump of reeds.

Pettersson was one of about 20 people in the water at the time, any of whom could have ended up as the surprise catch of the day.

The lay of the land makes its difficult to see if anyone is swimming, and following the incident the local county council has decided to address the problem with signs making it clear that fishing is not allowed near the popular swimming spot.

The fisherman extended a profuse apology to Pettersson, who while having suffered minor injuries, nevertheless managed to avoid being battered and fried.