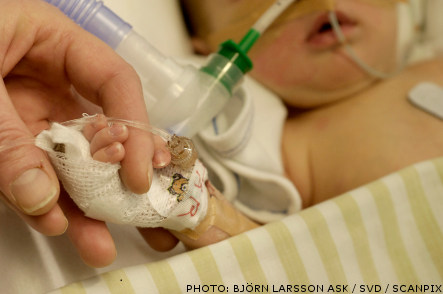 Writing on Dagens Nyheter’s opinion page on Sunday, Hugo Lagercrantz, a professor and senior consultant at Karolinska hospital, highlighted the privatisation of maternity wards as a major step backwards.

“Births are being sold off… while all specialist obstetric care is being located in Huddinge. To open new maternity clinics without linking them to paediatric clinics is a step back to the 1950s. But in those days the infant mortality rate was many times higher than it is today,” he warned.

Stockholm is in the midst of a babyboom, with 27,000 births this year – some 10,000 more per year than at the start of the 1990s. Nevertheless, Lagercrantz claimed that there are plans to close down one of the busiest paediatric hospitals in the cities, the Astrid Lindgren children’s hospital.

“It is already hard to get children into the Astrid Lindgren hospital, with long waiting times and queues. Every night staff are struggling to find beds for acutely sick children. A new raft of cost cutting, of around 40 million kronor, has recently been implemented to further streamline an organisation which is already as slim as possible.”

While deaths from certain illnesses such as infections and cancer have decreased, Lagercrantz emphasised that other conditions are on the rise among children. Diabetes and allergies are the most well-documented but psychological symptoms are increasingly common, with almost 10 percent of girls suffering from eating disorders.

Lagercrantz offered concerned parents some specific advice about where to go depending on their child’s ailment:

“If your child has a heart problem I recommend Lund or Gothenburg. If the child has a physical disability, or suffers from asthma or diabetes, child healthcare is better in many other counties. In Västerbotten, Jämtland and Blekinge there are twice as many paediatric beds as in the capital, proportional to the number of children.”

But Stockholm’s County Commissioner of Healthcare, Filippa Reinfeldt, rejected Lagercrantz’s assessment, starting with the future of the Astrid Lindgren hospital.

“There are no such plans,” she told Svenska Dagbladet.

“The Astrid Lindgren hospital will remain. We have always been working actively to strengthen child healthcare in the county and have invested new resources.”

She added that she met Stockholm’s healthcare managers at midsummer and they informed her that “it has never been as good as it is now”.