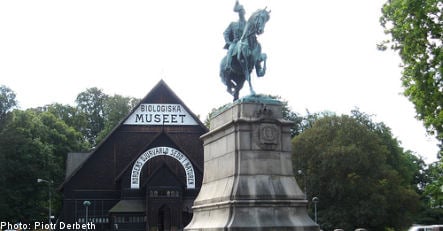 The fire broke out at the museum, which is located on the island of Djurgården in central Stockholm, at around 8.30pm. Fire services were able to put out the fire and believe that it was started deliberately.

“People walking by called the fire services and sounded the alarm. They had seen smoke and could hear that the fire alarm was ringing in the background,” said Raymond Winberg at SOS Alarm.

An outside wall in a cellar area of the museum was the source of the fire and there was a heavy build-up of smoke. 25 fire fighters from five stations were called to the scene and were able to swiftly limit the spread of the fire.

Police report that beer cans were found adjacent to the wall of the building where the fire broke out; they therefore suspect arson.

The Biological Museum is built entirely in wood and was opened in 1893. Its exhibits include stuffed animals from over 300 species indigenous to the Nordic region. The museum is part of the Skansen Foundation.

“It is a very complicated building in which to extinguish a fire. There are a large number of old paintings by Bruno Liljefors and the animals contain formalin. It is too early to say if any damage has been done,” said Anders Jansson of the police at the scene.

Skansen’s press spokesperson Christina Hamnquist was relieved that the fire had been put out.

“It was lucky that those people passed by the museum when they did. They also did their bit and tried to put out the fire. If the rescue operation had not got going as quickly as it did then it all could have gone very badly.”