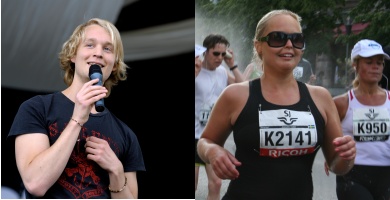 The Stockholm Marathon begins at 2pm on Lidingö and this year 18,200 runners will compete over the 42,195 metre course which makes two winding laps through the Swedish capital and finishes in Stockholm Stadion.

In the shadow of this gruelling endurance race 55 of Sweden’s leading comedians will do their best to entertain their audience in a ten hour marathon of their own, Skrattstock 2008, on the island of Långholmen from midday.

Dagens Nyheter has identified a few spots to watch the sweating masses push their bodies to the limit: Västerbron is a classic spot linking the islands of Södermalm with Kungsholmen; Stockholm Stadion for those wanting to welcome in the finishers; Pontus by the Sea on Skeppsbron, Mälarpaviljongen on Norr Mälarstrand and Duvel on Vasagatan are three watering holes that line the route. For those wanting to take part for a short stretch of the way DN recommends Gärdet where there is space to stretch your legs for a modest distance.

Västerbron has the advantage of being close to Långholmen and Skrattstock 2008. Björn Gustavsson, known to TV viewers from the coverage of Sweden’s Eurovision heats, tops the bill of comedians which also includes Magnus Betner, Zinat Pirzadhe, Måns Möller and Kodjo Akolor.

Skrattstock 2008 is free of charge and will take place in the shade of Långholmen’s amphitheatre stage.