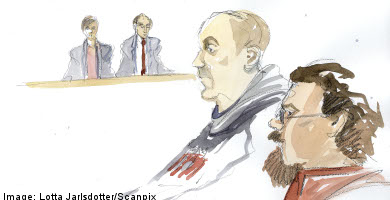 But while the man admits to procuring, he denies the more serious charge of trafficking.

“The case will hinge on how the court views the young woman’s disability,” prosecutor Robert Näppi told news agency TT shortly before entering the Attunda District Court in Sollentuna, north of Stockholm.

In Näppi’s view, the 19-year-old’s disability meant that she found herself in a “situation comparable to trafficking”. As she was particularly vulnerable, it was not sufficient to prosecute her husband for procuring, the prosecutor felt.

The defendant displayed no emotion as Näppi read out the charges against him.

The 44-year-old is accused of forcing his young wife to have sex with over 100 men at a hotel in Stockholm, an apartment in nearby Upplands Väsby and several apartments in Gothenburg.

“But he denies exploiting her vulnerable situation to assume control over her,” he told the court.

A 35-year-old man is also standing trial for acting as an accessory to aggravated procuring.

He is also accused of taking naked pictures of the 19-year-old and aiding her husband with the creation of a website on which to display the woman for potential customers.

The 35-year-old denies all charges against him.

The trial is expected to run until the middle of next week. The 44-year-old is also accused of several counts of raping a minor on the island of Gotland but that case will not be heard until the beginning of June.