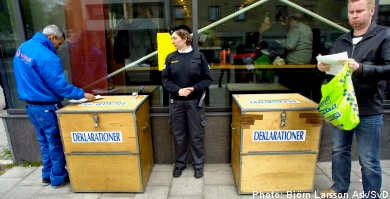 Sweden’s Tax Authority (Skatteverket) has done all that it can to ensure that in most cases filing takes only a few minutes.

“We do all the calculations for you,” said Skatteverket’s Kaj Kojer to The Local.

This year, additional forms have been added to Skatteverkets online tax filing system, one dealing with the sale of single family homes (Form K5) and the sale of apartments (Form K6). In addition, all individual business owners can file their forms online using the new business form (Form NE).

Moreover, tax filers will find that the electronic versions of their tax forms actually have more information than the paper versions when it comes to stock and real estate sales, and business activity.

As Skatteverket receives the bulk of its information from banks and employers, the information is generally “high quality and very accurate,” according to Kojer.

On the rare occasion that a mistake does crop up, it is often because an employer either failed to submit or sent in faulty information about the wages earned by an employee.

“In that case, that person can simply change the figure online and then tell their employer to submit the correct information,” said Kojer.

In most cases, however, filing taxes electronically in Sweden is a rather quick affair.

“If everything is in order, it can take about 20 seconds,” explained Kojer.

Of course, questions undoubtedly come up along the way and when they do, Kojer urged people to simply pick up the phone.

And don’t worry if you can’t speak Swedish—Skatteverket has operators trained to answer questions in several languages.

“It’s better to call and avoid making some mistake which could end up being quite costly.”

According to Kojer, non-Swedes make many of the same mistakes that Swedish citizens do when filing their taxes such as calculating deductions correctly or accounting for capital gains.

Sometimes people also have difficulty knowing what qualifies as a business expense.

In one instance, a foreign businessman ran into trouble due to what Kojer explained as “some wrong assumptions based on common practices in his home country.”

“He wanted to list payments made to public officials as a business expense,” said Kojer.

Kojer also pointed out a couple of significant changes which taxpayers should bear in mind when filing their forms this year.

First of all, the long-running tax on wealth has been abolished, meaning people are no longer levied a 1.5 percent charge on wealth exceeding 1.5 million kronor ($250,000) for individuals.

“This is a big change,” said Kojer.

In addition, the minimum level required to qualify for certain itemized deductions have also changed.

Individuals now must incur at least 8000 kronor in travel related expenses, up from 7000 kronor, to qualify for a deduction. And the level required for a general business expense deduction has been raised from 1000 kronor to 5000 kronor.

The general income tax deduction, which is calculated as a percentage of salary, has also been raised somewhat, resulting in a mean reduction of about 7000 kronor per person.

There is also a new capital gains tax rate of 22 percent for profits stemming from the sale of real estate, up from 20 percent last year.

But Kojer emphasized that a different rate of 30 percent applies for gains from the sale of stocks and other financial instruments.

Of course, keeping track of all this information is really more of an academic exercise for the majority of tax payers, as it is ultimately Skatteverket which ends up doing the calculations.

Rather than leaving all the information collection up to the individual, Skatteverket instead bears the burden of gathering and calculating information accurately, which they then send along a pre-filled form to taxpayers for review.

In general, explained Kojer, Skatteverket strives to be seen more as a “service agency” than a “controlling agency”, and is viewed as such by the Swedish public.

“The approach in Sweden and the Nordic countries is somewhat different than much of the rest of the world,” he said.

Kojer admits that having a state agency keep such a close eye on one’s financial dealings may seem a bit intrusive or strange for people from other countries, but believes that Swedes have just become accustomed to it—perhaps in part because they appreciate the fact that Skatteverket has done much the legwork for them when it comes to filing taxes.

“It seems Swedes find it easier to accept that the authorities are working for you and not the other way around,” he said.

“They find the tax authorities more reliable and trustworthy.

And with more and more people electing to file electronically, Kojer sees benefits for both the agency and taxpayers.

“It’s better for everyone. People can get their tax refunds by Midsummer (June 20) and there is a higher degree of accuracy,” he said.

And are Kojer and his Skatteverket colleagues disappointed that Denmark has overtaken Sweden as the country with the highest tax burden?

“Oh, yes, we are very sad about not being number one,” he joked, tongue in cheek.

“With taxes so high in all the Nordic countries, a change of a percentage point or two doesn’t make much difference.”

If you’re planning on leaving Sweden for more than a year, you will have to let the authorities know. The main authorities in question are Skatteverket (the Tax Agency) and Försäkringskassan (the Social Insurance Agency).

This also applies to any family members who move with you – any over-18’s should send in their own documentation to Försäkingskassan about their move abroad. If you’re moving abroad with anyone under 18, you can include them in your own report to Försäkringskassan.

You can register a move abroad with Försäkringskassan on the Mina sidor service on their website, here (log in with BankID).

This doesn’t mean that you’ll lose your personnummer – you’ll still be able to use it if you ever move back to Sweden – but you will no longer be registered as resident in Sweden.

Similarly to Försäkringskassan, you will also need to report any children you are bringing with you, and both legal guardians must sign the form, whether or not both guardians are moving abroad or not.

In some cases, you may still be liable to pay tax in Sweden even if you live abroad – particularly if you are a Swedish citizen or have lived in Sweden for at least ten years. This could be due to owning or renting out property in Sweden, having family in Sweden, or owning a business in Sweden.

You can tell the tax agency of your plans to move abroad here.

If you are moving to another country with the a-kassa system, such as Denmark or Finland, it may pay to wait until you have joined a new a-kassa in that country before you cancel your membership in Sweden.

This is due to the fact, in some countries, you only qualify for benefits once you fulfil a membership and employment requirement. In Sweden and Denmark, you must have been a member for 12 months before you qualify. In Finland, the membership requirement is 26 weeks.

If you qualify for a-kassa in Sweden before you leave the country, you may be able to transfer your a-kassa membership period over to your new a-kassa abroad and qualify there straight away, but this usually only applies if your period of a-kassa membership is unbroken.

Check what applies in your new country before you cancel your membership in Sweden – your a-kassa should be able to help you with this.

Similarly, if you are a member of a Swedish union or fackförbund, let them know you’re moving abroad.

If you’re moving to another Nordic country, they might be able to point you in the direction of the relevant union in that country, if you want to remain a member of a union in your new country.

If you’re moving to another EU country, you may be able to remain a member of your Swedish union as a foreign worker with the status utlandsvistelse.

If you chose to do this, you will usually pay a lower monthly fee than you do in Sweden, and they can still provide assistance with work related issues – although it may make more sense to join a local union in your field with more knowledge of the labout market.

If you have worked in Sweden and paid tax for any length of time, you will have paid in to a Swedish pension. You retain this pension wherever you move, but you must apply for it yourself.

To do so, you will need to give details of when you lived and worked in Sweden, as well as providing copies of work contracts, if you have them. If you have these documents before you leave Sweden, make copies so that you can provide them when asked.

If you move to the EU/EES or Switzerland, you may also have the right to other, non-work based pensions, such as guarantee pension for low- or no-income earners, or the income pension complement (inkomstpensionstillägg).

Currently, you can receive your Swedish pension once you turn 62 – although there is a proposal in parliament due to raise pension age to 63 for those born after 1961 from 2023, so this may change.