Eriksson told his players on Monday morning that his services would no longer be required after his first season with the club, according to BBC, which added that the players were angered by the decision.

Eriksson’s position was undermined by a demoralizing 3-2 loss to relegation strugglers Fulham at the weekend, squandering a 2-0 lead, but the Swede’s agent Athole Still insisted: “There is no way he will quit after the successful job he has done.”

Eriksson had also received firm backing from Michael Ball, City’s captain on Saturday in the absence of Richard Dunne, who said the squad were to a man supportive of the former England manager.

“Every player is 100 percent behind him (Eriksson). We like his methods, the way he trains, the way he goes about his tactics,” Ball said.

“If the club wants to go forward we have got to keep the coaching staff and obviously add a few more players.” 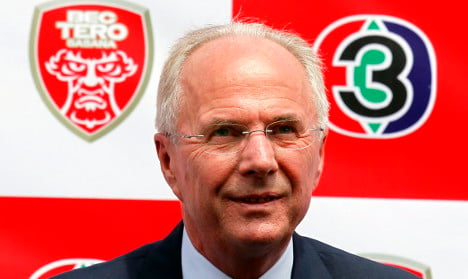 Eriksson, 64, had met the club’s board for seven hours on Tuesday before it was confirmed that he would work alongside coach Alexander Schmidt.

But 1860, who share the Allianz Arena with Bayern Munich but were relegated in 2004, said Friday that after a period of reflection, Eriksson had changed his mind.

The club’s Jordanian investor Hasan Ismaik had wanted Erikkson appointed as head coach but a compromise was reached for the Swede to work with Schmidt, who took charge in November.

Schmidt, 44, was previously the club’s Under-21 coach and only took charge of the first team on November 17 after Reiner Maurer was sacked.

After 19 matches of the season, 1860 Munich are sixth in the table, five points off third place which would guarantee at least a promotion play-off spot.