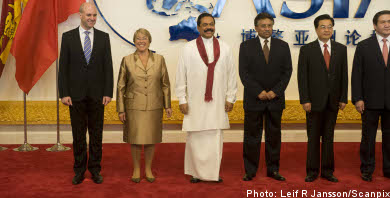 Reinfeldt and Hu will meet at the Boao Forum – an annual event addressing development in south-east Asia and dubbed “Asia’s Davos”. Both men will speak at the conference on Saturday before having a half-hour bilateral meeting.

The climate and the environment are the two key themes for the Boao Forum and the reason for Reinfeldt’s visit to China. One of the most important issues that Sweden will address when it takes over as EU chair country next autumn is how to push the world community to agree on a successor to the Kyoto Protocol. Reinfeldt’s meeting with the Chinese leadership is a key step in the process of securing a new agreement at the UN meeting to be held in Copenhagen in December 2009.

The Prime Minister has also promised to address human rights issues as well as Tibet when he meets Hu and other Chinese leaders. Exactly how and when these discussions will take place has not been divulged in advance.

Reinfeldt will hold a speech at the opening of the Boao Forum on Saturday. Following today’s meeting with Hu, Reinfeldt will then travel to Beijing where he has meetings planned with the Chinese prime minister, Wen Jiabao, on Monday. Reinfeldt’s Sunday schedule will include a visit to the Great Wall.

Ten other heads of government will take part in the Boao Forum on Hainan. Pakistan’s president Pervez Mushareff, Chile’s Michelle Bachelet, Tonga’s king Tupou V and Australian prime minister Kevin Rudd, will be among the dignitaries. The forum will be attended by around a 1,000 representatives from politics and business to discuss the region’s future under the broad theme of a “Green Asia.”

Newly elected Taiwanese vice-president Vincent Siew will also take part and will hold a historic meeting with Hu Jintao on Saturday afternoon. The meeting will be the first time two such high ranking representatives for the Taiwanese and Chinese governments have met since the proclamation of the People’s Republic of China in 1949.

“I hope that the meeting will deepen understanding between the two sides and create the basis for mutual trust,” said Siew to AFP on Friday.