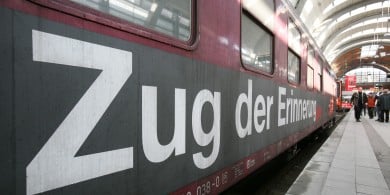 The 'Train of Commemoration.' Photo: DPA

The “Train of Commemoration” spokesperson Hans-Rüdiger Minow said he was pleased with the compromise.

On Monday the exhibition organizer, the International Auschwitz Committee, founded by concentration camp survivors, had expressed outrage at Deutsche Bahn’s decision not to accept their request to stop at the main station. Closing important stations to the exhibit is “incomprehensible and unacceptable,” the group said.

Deutsche Bahn has blamed their refusal on technical problems.

Organizers of “Train of commemoration,” which is supported by several grass-roots initiatives, had rejected Deutsche Bahn’s suggestions for alternative stations, insisting that the exhibit should be held at the Berlin central station to draw more visitors. The two sides have also argued over fees for use of Deutsche Bahn tracks and depot space.

The exhibit, which has been traveling throughout the country since November 8, 2007, features photos and films of Auschwitz survivors describing their deportation to the Nazi concentration camp. It has been making stops at former deportation stations. The travelling exhibit will arrive at the Auschwitz memorial on May 8, the anniversary of the end of the Second World War.

The Grunewald station is several kilometres away from central Berlin. The train is expected to arrive on Sunday.