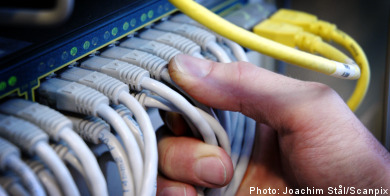 “We are happy to have signed a new contract with Cogent and regret that some of our customers have been affected by the dispute,” said Malin Frenning CEO of Telia Sonera International Carrier, Dagens Nyheter (DN) writes.

The dispute began at around 11pm on March 13th when Cogent decided to cut off communications with Telia Sonera in protest at the “degraded” service it claimed was experienced by its customers. By 6.30pm on Friday the connection was re-established and Cogent customers in the USA could once again access sites hosted by Telia, such as World of Warcraft.

According to Cogent CEO Dave Schaffer the dispute between the firms was due to Telia Sonera “making a conscious decision” to ignore warnings from Cogent that it was failing to provide adequate connectivity points for the exchange of information between the two companies’ customers.

Internet traffic between Cogent’s European customers was often re-routed via the US causing delays and blocking certain websites. Cogent decided therefore to cut off internet communications on March 13th.

The move caught Telia Sonera and its customers off guard.

“It was quite a surprise to us,” said Telia Sonera spokesperson Maria Hillborg to The Local.

Following Cogent’s decision, Telia Sonera released a statement to customers explaining why they were having trouble connecting to certain sites and blaming Cogent for escalating the dispute.

“Prior to Cogent’s abrupt decision to sever connectivity, Telia Sonera had rejected Cogent’s alleged breach of contract claim and explained Telia Sonera’s belief that Cogent had failed to satisfy certain contractual requirements. Cogent, in turn, responded to this impasse by disconnecting all connectivity with Telia Sonera,” said the statement.

But Cogent’s CEO insists that Telia Sonera consciously refused to honour the terms of an agreement between the two companies as a response to Cogent’s decision to expand into markets Telia Sonera considers its own.

“I firmly believe they’re attempting to keep us out of the Nordics and eastern Europe,” said Schaffer, noting that the troubles began shortly after Cogent announced expansion into markets Telia Sonera considered its home turf.

For the time being at least, and much to the relief of the customers of both companies, the dispute has been put on ice.

“We have worked around the clock to solve this problem for our customers. It is unfortunate that a third party has been affected but we are now happy that it is resolved,” said Malin Frenning to DN.

Folksam, which is one of the largest insurance companies in Sweden, has accused the firm of “systematic cheating”, after it emerged that TeliaSonera’s subsidiary in Azerbaijan had ties with the family of Ilham Aliyev, the Arab nation’s leader.

It has been claimed that the dictator’s daughters were shareholders of TeliaSonera's subsidiary Azertel, via a connected company based in Panama.

“It is distressing that in a large Swedish company…people thought that cheating would pay off in the long run,” Carina Lundberg Markow, one of Folksam’s managers told the TT news agency on Wednesday.

She criticized TeliaSonera for failing to act “in an honest and open way” when entering new markets.

“Instead, they choose to pay for success,” she added.

TeliaSonera is one of the biggest telecom operators in the Nordic and Baltic countries and also operates in several emerging markets in Eurasia including Russia and Turkey, as well as Spain. The Swedish state owns 37.3 percent of the company.

Swedish prosecutor Gunnar Stetler is already investigating claims of unethical business practices in Uzbekistan and told TT he had also been given new information concerning potential bribery in Azerbaijan.

The company has voluntarily cooperated with the investigation, handing over what Stetler describes as “extensive information” about “the terms and conditions in Eurasian countries”.

Stetler said he was unable to discuss how he had responded to the information. But calls are growing for TeliaSonera to release a public report about its business dealings.

“This shows the importance of having a set of values when doing business in complex markets or countries,” she added.