Under the proposal, PTS would be be allowed to mandate a functional separation, which requires dominant operators to separate their network infrastructure from their services division.

In practice, the proposal means that Telia Sonera can be forced to clearly carve out the company that manages the firm’s copper network from the rest of the company. The company would then sell its services to competing operators on equivalent terms.

Telia Sonera would still be able to keep ownership rights for accessing the copper-wire network.

“The aim is to provide consumers with greater choice in broadband services and make changing operators easier. Moving forward we also believe it will lead to lower prices for broadband services,” Torstensson said in a statement.

The EU Commission must also give its blessing before before PTS can proceed with any proposed functional separation.

Telia Sonera isn’t too concerned about the new proposal.

“We’ve already created a company for our copper-wire network and we don’t believe that this law will ever be applied,” said Ola Kallemur, a spokesperson for the company.

“The EU Commission only approved this coherent law if cases where competition isn’t working properly and no other tools can be used. And the Commission has pointed to Sweden as a role model for how competition should work, so we are not too concerned,” said Kallemur.

The Social Democrats welcomed the government’s proposal and judge it to be good for competition. But the suggestion may be in doubt should the government decide to privatize Telia Sonera completely.

“If a private actor gets access to the copper-wire network there is a risk that classified information from, let’s say, the Armed Forces, could end up in the wrong hands. That could be a risk to national security,” said Désirée Liljevall, the Social Democrats’ spokesperson for telecom issues. 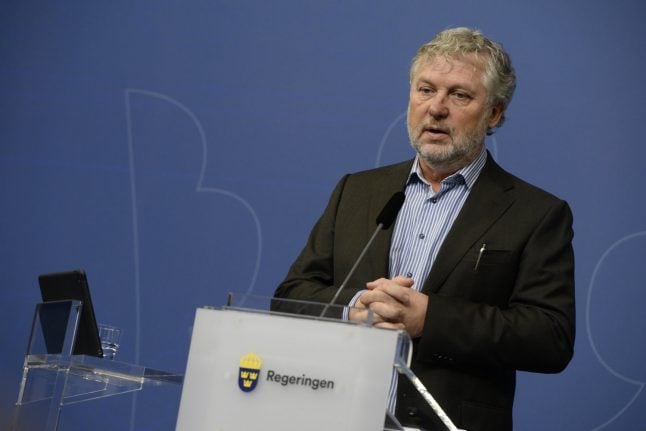 Housing and Digitalisation Minister Peter Eriksson. Photo: Pontus Lundahl/TT
Prime Minister Stefan Löfven has also promised that over half a million more Swedes will gain access to fast broadband Internet over the next four years.
The plan aims specifically to provide 100 Mbps broadband by 2020, an investment the government hopes will create better living and working conditions for people all over the country.
“We can not continue with a strategy that leaves people out,” said digitalisation minister Peter Eriksson, according to news agency TT.
“I think that this is a rather important day,” Eriksson said as the government presented its new broadband strategy at Rosenbad in Stockholm.
According to Eriksson, three quarters of the population currently has access to fast broadband.
“It is unacceptable that not everyone is included,” said the minister.
The targets presented by the government can be separated into three steps.
In 2020, 95 per cent of all households will have access to broadband of at least 100 Mbps.
In 2023, all of Sweden will be connected to stable mobile services of high quality. Connections will, according to the government, be good enough for users to go online entirely without limitations such as interruptions or lack of capacity. This will apply anywhere people or businesses can be found, such as in holiday homes, recreational areas, and on roads and rail routes.
By 2025, the whole of Sweden will have access to fast broadband.
“We have beaten our current targets and our new target is for all of Sweden to be connected by 2025,” said Eriksson.
Research has shown that, in addition to helping with everyday tasks such as using chat services, watching television and surfing the Web, the implementation of fast broadband can lead to overall savings. Municipal services will, for example, be able to save millions by replacing physical visits with video conversations.
Url copied to clipboard!