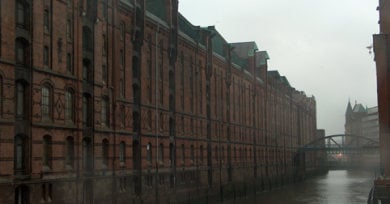 Northern Germany has some of the country’s worst weather: lukewarm, damp summers follow muddy, grey springs, while tepid, snowless winters are preceded by moist, dark autumns. It sounds grim and even many locals in the region’s biggest city, Hamburg, will admit that the climate is not its biggest selling point.

It’s a shame really, because with the Alster Lake, the harbour, several very nice parks, and the long stretch of beach on the River Elbe, Hamburg’s a beautiful place when basking in sunlight.

But the chances of actually catching some rays in Hamburg are small: Germany’s second largest city averages around 200 days of rain and nearly 800mm per year. In Hamburg, an umbrella is basically an extension of the arm, and weather is categorized by what shade of grey the clouds are; a very light grey, the colour of cigar ash, is considered sunny, while dark, apocalyptic grey is thought of as slightly overcast.

But that doesn’t mean you can’t enjoy yourself – Hamburg and its surrounding cities have plenty to keep you entertained when that inevitable big wet blanket descends.

The best escape for a rainy day is the Kunsthalle, a sprawling building near the main station with art from the 15th century to the present. There’s a good collection from the Impressionists and Expressionists, as well as works from Klee, Kandinsky and Warhol. The paintings by Caspar David Friedrich, who was from northern Germany, are the most popular with visitors. From the first floor cafe, you can watch the fat drops of rain splashing into the Alster Lake and the cars grappling with enormous puddles at the big intersection below.

As the city’s entertainment district, you can certainly spend many rain-soaked evenings cruising the bars of the Reeperbahn; on any given night, leading bands and musicians play in clubs like Grünspan, Molotow, the Docks and the infamous Grosse Freiheit 36 (where the first incarnation of the Beatles played in the basement nearly fifty years ago). The Reeperbahn definitely looks better drenched, as all that water washes the beer (and the various other liquids and solids) from the footpaths.

Another area of the city that looks good wet is the former dockland area of Speicherstadt. The historic brick warehouses of the harbour turn a deeper, darker shade of red in the rain and the cobblestone streets glisten in the damp. Interesting indoor attractions here include the emigration museum BallinStadt. The museum’s name literally translates as ‘Port of Dreams’, reflecting the hopes of the thousands of European emigrants who passed through Hamburg as they sought a better life on the other side of the Atlantic.

The Speicherstadt Museum, the Spice Museum, the Miniature Wonderland, and the rotating exhibitions of the Deichtorhallen gallery are among the other places worth a visit in the area. You’ll forget the rain completely in the Dialogue in the Dark, which offers a fascinating insight into the life of the blind.

Amazingly, the harder the rain falls, the more the locals crave water. Some go to the salted pools and bubbling tubs of Holthusen Bad in Eppendorf while others take boat trips on the Alster Lake and through the harbour, often ending such a day in a café overlooking the water, be it a pool, the lake or the river. Alster trips leave from Jungfernsteig while harbour trips leave from Landungsbrücken.

If you’re near Landungsbrücken and don’t want to hit the water, you could hole yourself up in one of the Portuguese cafés along Ditmar Koel Strasse. On rainy days; locals set up camp in cafés in Ottensen, the Schanze or the Portugese Quarter, and complain about the weather with a few friends, or to anyone within earshot.

You won’t get wet, but you can smell and feel the damp in the Old Elbe Tunnel, also near Landungsbrücken. This tunnel built in 1911, an engineering marvel at the time, descends 24 metres below the surface and is still in use. The tunnel walls are decorated with glazed terracotta ornaments depicting fish and crabs and, perhaps as testimony to German humour, rubbish, old boots and rats.

On a rainy evening, if you’re not heading to a cozy bar in the Schanze or looking for some live music, or action, in St Pauli, you could visit the Opera, the English Theatre (one of around 25 theatres in downtown Hamburg), or take in a film; the Grindel and Abaton cinemas regular show the latest films in English.

There are also a number of cities within striking distance from Hamburg. Lübeck, under an hour north by train, has a medieval old town built on an island, with a skyline of Gothic spires, most notably the twin towers of the Holsten Gate. With the fairytale scenery, the Museum for Theatre Figurines, the Puppet Theatre and as the home of Marzipan, Lübeck is an especially good place to take children on a rainy day. Wash down the city’s best Marzipan with a sweet coffee at the 200 year-old Café Niederegger on Breite Strasse.

Bremen, an hour south-west by train, has weather as bad as Hamburg. The city’s main attraction is the statue of Roland, nephew of Charlemagne and the city’s protector; the locals have great respect for Roland, and this is exemplified by the small umbrella-type roof above his head that shelters him from the persistent precipitation.

The Kunsthalle and the Kunstsammlung Böttcherstrasse have collections worthy of a wet-day visit, but perhaps the best thing to do indoors is to tour the Beck’s Brewery, which includes a fair bit of sampling of the finished product. At the end of the tour, you can toast another grey, miserable day in northern Germany.

– Concerts, opera and theatre listings; check the local papers on Thursday for weekly liftouts and the magazines, Szene, Hamburg Pur and Prinz.