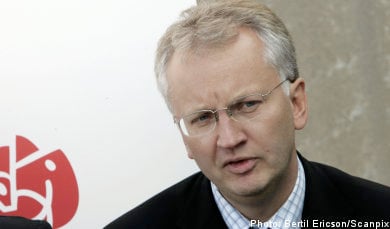 In a statement released to the press, Nuder said that life was “full of surprises.”

“If Mona Sahlin thinks someone else is better placed to formulate Social Democratic economic policy then I don’t want to stand in that person’s way.”

Nuder said he did not want to jeopardize the Social Democrats’ development by allowing a situation to arise in which one of the most important functions in the party was shrouded in uncertainty.

“I want to wish my successor every success. She/he will have a key role to play in getting the Social Democrats back into government,” he said.

A close aide of former Prime Minister Göran Persson, Nuder rounded off his statement with a light-hearted look at what the future might hold.

“I’m looking forward to sitting down with Bosse Ringholm on the Riksdag’s shelf for old men,” he said.

But party spokesman Ömer Oguz denied the existence of any such plans.

“That information is incorrect,” he told TT.