The taboo of publicly linking violent crime with immigrant youth is quickly vanishing. Fuelled by violent headlines and studies showing clear links between young men with immigrant backgrounds and violent crime, words that have dominated kitchen table discussions for years are turning into strong public statements and political action.

Chancellor Angela Merkel told Die Zeit, “It is significant that nationwide half of the violent crimes in Germany are committed by people under 21, a disproportionate amount of who are young people with migrant backgrounds.” She explained that these figures point to an urgent need for stronger integration efforts. She added however that the statistics “have nothing to do with the condemnation of an entire group of people.”

A recent report showed that 80 percent of severe youth crimes in Berlin were committed by delinquents with immigrant backgrounds. The epicentres of this trend are the Berlin neighbourhoods of Kreuzberg, Moabit and Wedding. These neighbourhoods are home to homogenous immigrant communities, where young men grow up torn between tradition and liberty.

The family situations of these young men are often characterised by subjugated mothers, and fathers who use physical means to maintain their position of head of the household. An editor for the Turkish newspaper Hurriyet has estimated that 50 percent of Muslim women in Germany have been victims of domestic violence.

Time has not eased integration, as families actively seek to keep strong ties with the home countries through imported brides and close knit communities. Many of the youths committing violent crimes are the children and grandchildren of ‘guest workers,’ migrant labourers brought into postwar Germany, specifically in the 1950s and 60s, in order to plug a labour shortage. Most of these young men came from southern Europe and the Middle East, particularly Turkey.

One or two generations on, this population, which Germans assumed to be transient, makes up a large part of German cities and is still living on the periphery of society. Daily and widespread racism on the part of the Germans has also been cited by many critics as a major obstacle to integration. Such racism has been blamed for isolating children of immigrants by limiting access to education and employment opportunities.

A telling story is a Munich pensioner who was beaten to death by two young people with immigrant backgrounds on the Munich U-Bahn. The attack was provoked when the man scolded the young people for violating the smoking ban. As unprovoked and violent as that attack was, some argue that condenscending corrections by Germans of foreigners’ behaviour has been a barrier to integration.

More than 40 years after guest workers first came to Germany, many Turks and Arabs live in neighbourhoods where they are largely isolated from German society.

“In Berlin (many Turkish and Arab) immigrants live in ghettos and they remain there together,” explained a Canadian of Arab background in his late 20’s who works in a professional job and lives in Berlin on a semi-permanent basis. “Those areas are like ghettos. You feel like you left Berlin,” he said, explaining his impressions of Neukölln.

As for having an Arab background and living in Berlin, the young Canadian said that he has not personally been affected by negative attitudes towards Arabs, but says he surrounds himself with internationals. He explained, “I don’t think I’ve been through this personally, but I can see difficultly for people who have to deal with local people.” He pointed out that negative stereotypes of young Turks and Arabs are wide-spread in German society.

Youth crime has become a hot topic in Germany. Last week, Roland Koch, the state premier of Hesse and member of the centre-right Christian Democrats party, said that there are “too many criminal foreigners” in Germany. This week, he unveiled a six-point plan that included longer and harder jail sentences. Chancellor Angela Merkel has also suggested American style boot camps as a way to tame delinquent youth.

In response to a series of attacks by young people with immigrant backgrounds on the Munich U-Bahn system, Guenther Beckstein, premier of Bavaria state said in a newspaper interview, “We have to apply tougher punishments to the younger ones, and use every opportunity for deportation…If integration does not succeed, that is often the only thing left to do.”

Softer initiatives, such as mandatory integration classes for immigrants who qualify and women-only German classes, have been introduced in order to ease the language and cultural barriers to integration. In addition, law makers wanted to empower imported brides with basic knowledge of the German language and German society.

Such initiatives aimed at combating integration problems among the descendants of former guest workers are often seen by ‘expats,’ migrants from first-world countries who are often highly educated, as an annoyance.

“Lots of Americans see this as a chore,” said an American living in Germany, who said that some of his friends had comfortably relied on their English, but now have to take German classes in order to stay in the country. Even though his acquaintances saw this requirement as an inconvenience, he conceded that they avoided German “out of laziness.”

“Regardless of where you are from, if you want to stay in the country, you have to learn the language,” said the Canadian of Arab background living in Berlin. “It is a way to protect the culture of Germany, and that is not a bad thing.”

The rise in youth violence has affected many young Germans’ views on immigration. The 2006 Shell-Youth Study showed that 58 percent of young people in 2006 believe that Germany should accept fewer immigrants, in comparison to 46 percent in 2002.

“The young members of the local population have many fewer prejudices against immigrants than the older members – but they do have some.

“For example, in comparison to the last Shell Study in 2002 the proportion of those who said they were against further immigration into Germany has increased considerably,” said Klaus Hurrelmann, Professor of Social Sciences at the University of Bielefeld, one of the best-known researchers on the topic of youth in Germany, in an interview with the Goethe Institute.

As the Local has been reporting, Germany is currently facing a significant worker shortage.

We spoke to Panu Poutvaara, Professor of Economics at the University of Munich and Director of the Ifo Center for International Institutional Comparisons and Migration Research to find out if Germany’s immigration policies are affecting this and how they could be improved.

The Local: Why is there currently such a shortage of workers in Germany?

Panu Poutvaara: Before the pandemic, the German economy was actually doing very well. After the 2008 financial crisis, in fact, it was one of the best performing European economies which meant that the need for workers increased and this trend has been growing for the last 14 years.

Which sectors are seeing worker shortages?

With an ageing population, there is a growing demand for workers in healthcare and in old age care.

But there is also a lack of skilled workers such as tradesmen, plumbers, and electricians. IT specialists are also in high demand globally, which means that there is a lot of international competition, particularly from the US. 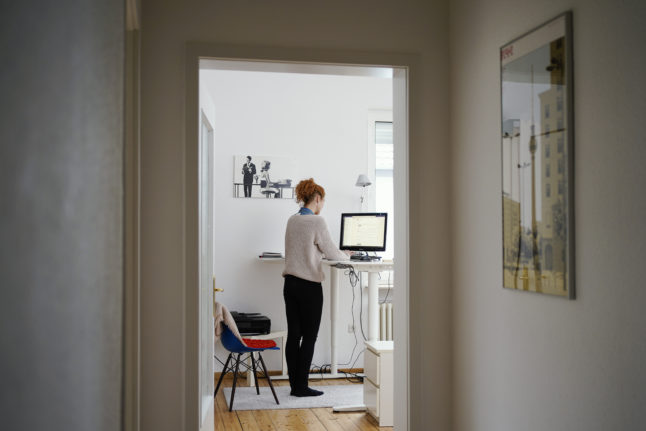 A woman uses her kitchen worktop as a standing desk while working from home. Photo: picture alliance/dpa | Uwe Anspach

Is Germany an attractive place for foreigners to come and work?

Germany certainly has a lot of opportunities to offer and, in terms of the total number of immigrants, Germany has become one of the most popular destinations worldwide.

But there are also significant disadvantages for foreigners moving to Germany.

For IT specialists, for example, the US is a more attractive prospect for many people, especially from countries like India that also have English as an official language. Furthermore, salaries are higher and taxes are lower in the US than in Germany and American companies are the market leaders in these sectors.

Do you think language is a big issue then, in terms of putting people off coming to Germany?

Yes, and I think Germany needs to be more flexible with its language requirements. In fact, I expect the current government to propose acknowledging English skills in the immigration process, in addition to German skills.

The Netherlands, for example, have an advantage over Germany in that is much easier to live there without speaking the local language and most services are available also in English.

READ ALSO: ‘Appointments in English’: How Germany wants to attract talent from abroad

In my opinion, it would be good to have more jobs in English too, as far as possible. This would mean that employers should think about whether German is really necessary to be able to do the jobs they’re recruiting for.

What other things do you think Germany could do to encourage immigration?

One thing would be to improve the immigration process. I know that a lot of people currently face very long waiting times at the German embassies, and this presents an unnecessary hurdle that could quite easily be alleviated.

Another thing that Germany could do, would be to broaden the offer of German language learning in foreign countries.

For professions like healthcare, it’s imperative that workers speak German so that they can communicate with their patients. Therefore, it would be good to offer young internationals the chance to learn German in their home countries.

The Goethe institute around the world has the potential to improve such offers, to strengthen partnerships with countries like India and offer students German language learning programmes. 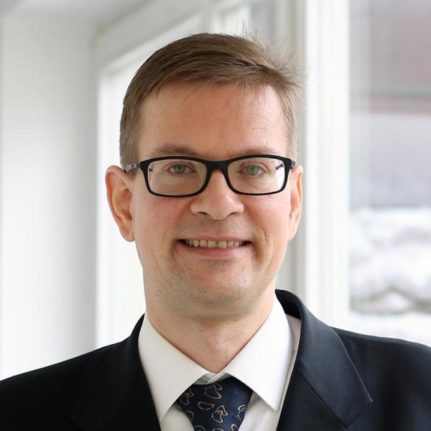 Panu Poutvaara, Professor of Economics at the University of Munich and Director of the Ifo Center for International Institutional Comparisons and Migration Research. Photo courtesy of Panu Poutvaara.

What do you think about the new points-based immigration system that the German government recently announced?

I welcome it. It’s an improvement.

The proposals aren’t fully fleshed out yet, and it will be interesting to see how the points system will work exactly in case of excess demand in a given year. Will preference be given to those who get the highest number of points, or is everyone who has the required number of points allowed to come until the quota is reached?

READ ALSO: What you need to know about Germany’s points-based immigration plans

One thing that is good about the proposals is that they also target less qualified people and not just those with a certain type of education.

As part of plans to overhaul immigration laws, Germany is planning to allow non-EU nationals to hold multiple citizenships. Do you think the proposed changes could help attract more skilled workers to the country?

I think it will clearly have some effect, but that it’s not the most important factor.

The problem is that some of the countries from which migrants are coming, such as India, don’t allow dual citizenship themselves.

I think reducing bureaucratic hurdles and speeding up the process of giving visas to people who want to come to Germany from non-EU countries, will have a bigger impact than offering dual citizenship.

Are there any other factors that could help alleviate the worker shortage?

Another thing to mention is that Germany still has a challenge when it comes to integrating people who are already in the country.

Unemployment rates are higher among refugees and Germany should definitely try to improve labour force participation in this section of society.

I welcome government plans to give people who initially came to Germany as asylum seekers before January 1st, 2017 and who have been given only temporary permission to stay, an opportunity to obtain permanent permission to stay, provided that they find a job and learn German.