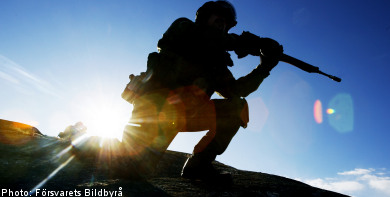 It is the first time since the study began that public opinion has been more positive than negative toward EU defence participation by historically non-aligned Sweden.

The study, conducted by FSI (Forskningsgruppen för samhälls- och informationsstudier), shows that 39 percent of those polled are positive toward Swedish participation in a common EU defence.

Twenty-four percent are against the idea, while the remaining respondents are neutral or have no opinion.

The result marks a major shift in public opinion from FSI’s last poll conducted in the fall of 2005.

In the previous study, 32 percent supported Sweden’s involvement in EU defences, while 39 percent were against the idea.

The new results also shows that opposition to Swedish membership in Nato has also softened somewhat, with only 34 percent opposing the idea.

In the 2005 study, 37 percent opposed Nato membership for Sweden.

The future and direction of Sweden’s military has been the subject of intense debate and several setbacks since last summer.

In reporting on the results of the FSI study, Dagens Nyheter (DN) points out that the competing viewpoints of various politicians, lobbyists, and different groups from the defence establishment have caused the general public to lose confidence in the Swedish military.

“Uncertainty about whether Sweden has an effective defence has increased. And more and more believe that an EU-defence can compensate for the reduction,” said FSI’s opinion analyst Joachim Timander to DN.