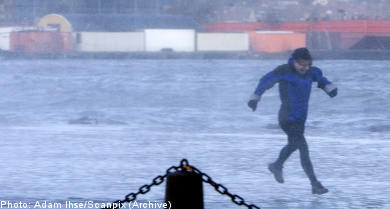 Around 8,000 households, mostly in western Sweden, had lost power.

“This may be the fourth or fifth worst storm in Sweden since 2000,” said meteorologist Bengt Lindström of Sweden’s national weather service, SMHI.

Winter storm Gudrun from 2004 ranks as the worst storm of the last decade, while 2007’s Per comes in at number two. Officials have yet to name the current storm.

Despite the violent winds, the police and coastguard in Bohuslän have not reported any major incidents.

“So far it doesn’t seem too bad. But it is quite windy, to be sure. We’ll see how the storm develops through the day,” said a duty officer with the Västra Götaland police.

Inland wind speeds were clocked at nearly 100 kilometers per hour between Vänern and Vättern lakes in west-central Sweden.

“There is a greater risk for falling trees because of damp soil,” said Lindström, who also warned that the wet ground could increase the risk for flooding near streams and rivers.

The storm is expected to move to the northeast throughout the day, but should weaken before reaching the northern Baltic by Saturday night.